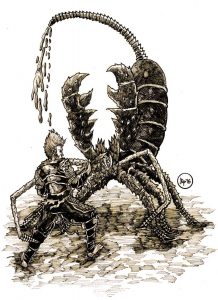 Amidst the Hundred Moons of Gehenna, there are a myriad of Daemon empires, each a horror different than the last. The Rage Pits, the Factory of Gilmekh, the Skinning Fields; all have their share of beasts and fiends to consume the unwary traveler, body and soul. Among the more infamous of these loci is the Gossamer, realm of the Spider Queen Khabissol. The Gossamer itself is a mind-bendingly colossal network of fungoid threads, woven like a spider’s web between the three planetoids Akob, Hema, and Romm. The network is so strong that it actually links the planetoids’ orbits. In the Gossamer live and breed the fiercest spider-kin in the Universe, from the tiniest bearers of burning venom to cottage-sized engines of war. Amongst these chitinous beasts are fiendish specimens still more perilous- the Dire and Grim varieties, most dangerous of all the Daemonic Arachnida.

Uncounted varieties of spiders, scorpions and cousin species have been harvested from mortal worlds with the intent to breed them into terrifying weapons within the Gossamer. These are the basic stock from which Khabissol has long since propagated her customized war-creatures, the arachnid contribution to the Daemonic Grim Clades. These Dire arachnids often carry specialized mutations or augmentations specifically intended to make them better able to hunt mortals. All of these vicious beasts are ensouled, not unlike the Garden-Born of the Celestials or the Noble Ones sometimes found on mortal worlds. Dire Spider-kin come in many shapes, but all are larger than their base stock and possess a spark of dark intelligence that makes them far more dangerous. The Dire Whip Scorpion, most often referred to as the “Dark Vinegaroon”, is one such type of creature. 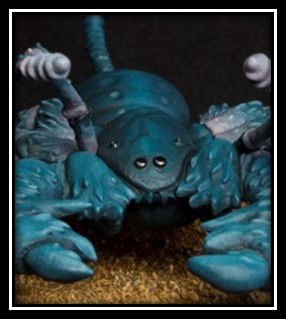 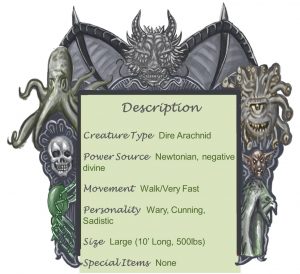 From the tips of its claws to its back feet, the Dire Whip Scorpion is as long as a large crocodile. Though as tall as a small horse, even this relatively slow arachnid easily outpaces these speedy four-legged mammals. Its entire body is sheathed in bronze-hard exoskeleton.  This armoring is an inky black with a cast of iridescent red or blue in brighter light, and numerous spiky clusters making close-quarters combat uncomfortable at best.  Despite their appearance, Dark Vinegaroons are more closely related to the true spiders than they are to scorpions proper. The misidentification is primarily due to the large, powerful pincer-like claws sprouting from its pedipalps. Though smaller in proportion to their body than, for example, a monstrous crab’s, they are no less dangerous – the beasts’ claws are known to shear through leather armor or chainmail like a set of tinsnips. Unlike a scorpion, these beasts lack a true segmented tail and instead have a whip-like stinger that whirls in the air behind them.  They also have an extremely long set of antennae that can extend a full staff-length from their bodies.

Dark Vinegaroons are a well-known inhabitant of the Gossamer, and for good reason. Their base breed, the Giant Whiptail Scorpion, is a common staple in Daemonic armies and serves a multitude of battle-tested purposes.  The Dire version is preferred amongst Daemonic mercenary groups, favored for its unique combination of speed, armor plating and innate fighting skills.  The beasts are often responsible for a significant proportion of the casualties that these squads claim, giving them a fearsome reputation. Dark Vinegaroons are also called “headhunters” in mercenary companies, a nod to their tendency to grab smaller prey in a pounce and crush their skulls- with or without a helm- between its teeth-like trochanters. The creatures seem to prefer brain tissue above all other nutriment, especially unnerving because of the relatively low brain weights of their typical prey species. 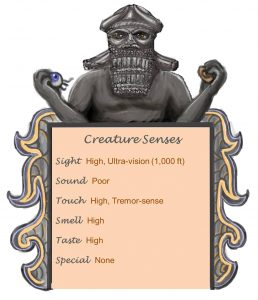 The nickname “Vinegaroon” is derived from the strong scent of acetic acid, the basis of vinegar, secreted by glands found at the base of their abdomen. Though they lack a sense of smell, they have external organs at the bottom of the feet which are highly attuned to “tasting” the various pheromones that they use for communication. Dire Whiptail Scorpions possess three sets of long legs, the fourth pair long ago having evolved into antenna-like structures that increase the beasts’ awareness to minute vibrations in the air. This tremor-sense augments their unique eyesight, and can effectively replace it in some situations. Dark Vinegaroons are rarely caught unawares, and when they are a swift dose of acid serves to rapidly discourage attackers. They are seldom preyed upon by creatures of a similar size, and are only truly in danger from those things that lurk even deeper in the darkness of the inner Gossamer, such as the Dire Ogre Spider and Skeerder.

Like true-scorpions, all Dire Whip Scorpions fluoresce under ultraviolet light in patterns that identify their lineage. It is thus unsurprising that they have superior ultravison which pierces many illusory magics – as most mortal spellcasters are not able to project their illusions into the higher wavelengths of the spectrum, and those that can generally craft poor images without being able to see them. Its multiple sets of eyes are very adept at seeing deep into dark and cold recesses. This preternatural night vision makes them particularly vulnerable to bright light, and the surest way to keep a Dark Vinegaroon at bay is a strong constant illumination – at least temporarily. These malevolent fiends have been known to cake their eyes in mud and grime to negate this technique, using tremor-sense to fight and defend with almost no loss of prowess. 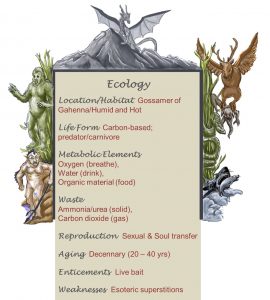 Like other Dire creatures, these beasts are the result of “captured soul” attachment. Though the means by which a mortal spirit binds to a beast or plant is not well-understood, it is clear that at least some Giant Whiptail Scorpions can attract the souls of vicious dead mortals. The imperfect bond between soul and monstrous body grants them an insight that imparts a certain base cunning, allowing for unusual behaviors and unlikely tactics. They routinely show the capacity to recognize basic traps, plan for future ambushes, and even use their environment to their advantage in the form of positioning or traps of their own. In one well documented incident, the intrepid traveler Lin’Chi saw a specimen recognize a falling block trap, dodge the stone, and reset the trap to snare pursuers.

”Captured soul” attachment seems to occur with unusual frequency in the Gossamer. This suggests that Khabissol has a deeper understanding that allows her to breed populations of Pedipalps, Spiders, Solifugids and Scorpions of a Dire nature. The techniques that she employs are unknown outside of her own webs, but Khabissol is noted to import a vast number of slaves that do not seem to be set to building anything, and are never seen again. Whatever foul rituals she uses, the Daemonic Paragon has provided a significant contribution to Gehenna’s military might. Best of all, her army is somewhat self-sustaining; the true advantage of large populations of Dire arachnids is that they prefer to breed with other Dire mates. It is rumored that such forced breeding programs is the direct cause of the fearsome Grim vermin – the highest level of soul attachment and developmental perfection attainable by such beasts. Females bearing young are especially preferred by Daemonic taskmasters and mercenary captains, both for their ferocity in defending their young and for the appetite of the personal swarm of hungry mouths that they bear. 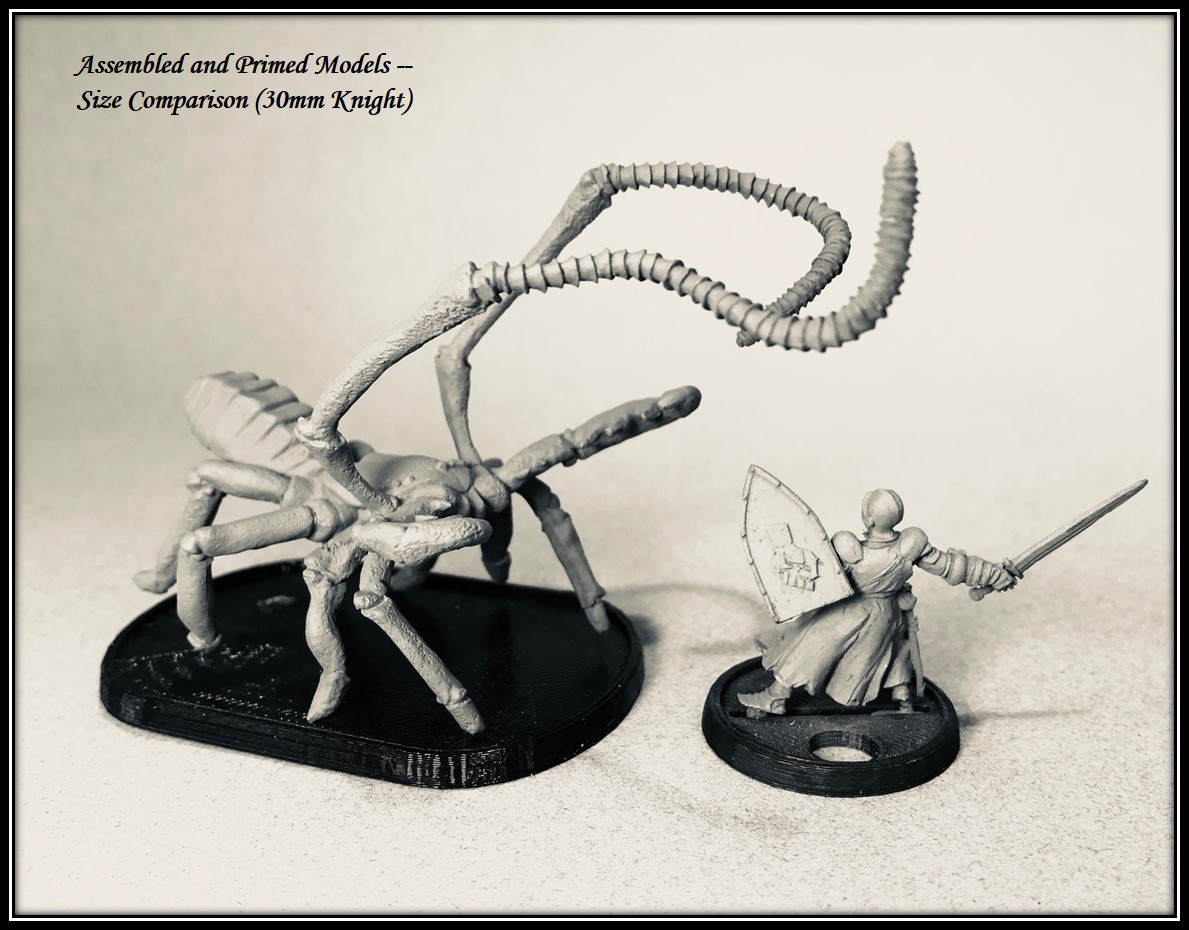 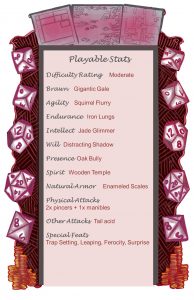 Dire Whip Scorpions are a common war-beast for the Daemonic hordes, and therefore relatively easy to summon. They may be called into a large but standard salt-and-silver circle etched in the normal way, and prefer offerings of live prey. Ideally these prey items should be small and fast-moving to attract the creature’s attention. Many Dark Vinegaroons in the Gossamer are spoken for by various Daemon Paragons or even Devils, and have custom-made gold binding rings. These artifacts allow much faster, impromptu summoning of the specific creature to which they are attuned, at the cost of a moderate probability of “translational errors” – which are sometimes as horrific as limbs turned inside-out. They also enable the holder of the calling ring to interrupt the duration of another conjurer’s spell to recall them. Summoned Dire Whiptail Scorpion cannot meaningfully communicate with humanoids, and so cannot bargain, but can be compelled to service and understand simple, straightforward commands.

In mercenary companies, the Dark Vinegaroon is a highly mobile attack unit and sometimes a mount for lesser Daemons, though it should be noted that the Outsider has absolutely no control over the beast unless they wield personal power great enough to intimidate it. Whiptail-riders are often eaten by their mounts, but this is generally considered to be a part of the cost of their upkeep. Dark Vinegaroons coexist especially poorly with Dipterakks, which they perceive to be large, custom-made snack items. They are also much more likely than other equivalent companies to fight engagements underground and in the dark where these daemon-bred arachnids have an advantage