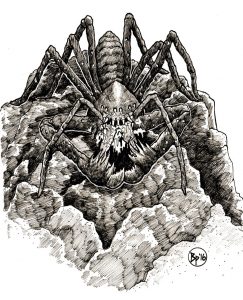 A myriad horde of chitinous horrors skitters betwixt the cold strands of Gehenna’s Gossamer. In this frigid environment, suffused with the energies of chaos and evil, creatures grow large and cruel. The Gossamer is famous for its fast, nightmarish Dire arachnids: the Skeerder, the Tareesh, and the Dark Vinegaroon all inspire fear in the heartiest of travelers. But more subtle dangers lurk in the deep places where paths are few; things no less vicious lie in wait for the slow, the weak, and the unwary. Despite the fame of their warm-hemolymphed cousins, these ambush predators are actually more populous in the Gossamer due to the efficiency of their lifestyle. They are less known, however, because of the efficacy of their hunting. The most notorious of these creeping assassins are the Qavadakar, beasts that wait in darkness or serve as hideous mounts to the Spider Queen’s Troll cultists.

Most of the Gossamer’s denizens are not murderous arachnids; its lower trophic levels are occupied by large but innocuous creatures of other families. Isopods, millipedes, and blind termites creep everywhere, consuming fungus, lichen, carrion, or even the Gossamer itself.   The base stock of Qavadakar, commonly known as the Giant Pedipalp (tailless relative of the Giant Whip Scorpion), specializes in consuming these herbivorous morsels, cracking through their shell with saw-like mouthparts to reach the tender flesh beneath. Like smaller arachnids, they inject an enzymatic ¨soup¨ to compound the trauma of their crushing grasp and break down tissue into a near-liquid slurry.  Though formidable in size, these creatures avoid larger prey at risk of becoming the hunted- but in the vastness of the Gossamer, the Spider Queen Khabissol has created an organic war factory wherein she twists timid giants into rapacious marauders. Dark energies endow a few chosen specimens with heightened awareness … and fill them with hatred.  The resulting Dire Pedipalps soon discover that their hunting technique is just as effective upon armored mortals and unwary daemons as it is upon their former prey; the creatures are little-inclined to draw a distinction between food and indiscriminate death.

Buy Giant Pedipalp at the Bazaar 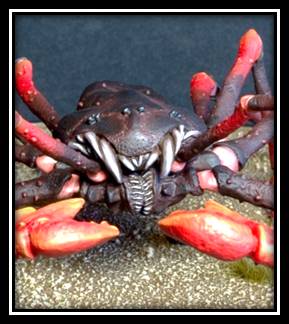 Though slow by the merits of the Dire Arachnidae, the Qavadakar are no less capable of carnage. The average specimen is comparable in size to an elephant, with a heavy-plated stocky body perched atop eight spindly legs. The pedipalps for which
they are named have evolved into long, grasping members not unlike the scything claws of the praying mantis. These limbs are lined with bristling spines adapted to crush and pierce. The creatures spend a significant amount of time grooming these tines, leaving them smeared in caustic slime so that even a missed grab leaves horrid wounds. The mouthparts themselves are terrifying, machine-like maws. Like a 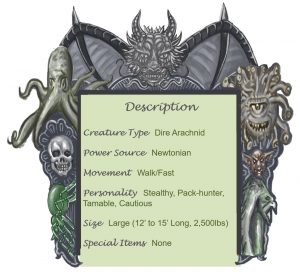 hungry flower with saw-bladed petals, the Qavadakar’s jaws grind through thick exoskeletons quickly to inject toxic saliva. These same jaws, though, make the creatures mostly unable to consume solid food; like their smaller arachnid relatives, they are forced to make decisive strikes and wait for their prey to expire and begin to deliquesce before they are able to consume it.

Khabissol’s altered Qavadakar are Dire creatures, beasts with mortal souls attached to their physical forms.  The process is unknown to mortal – and even immortal – sages, a violently guarded secret of the Daemon Paragons.  From their unnatural inception, Dire creatures are twisted by self-loathing, and gain pleasure only from cruelty and destruction.  For the Dire Pedipalp, this “awakening” results in intelligence approaching that of savage quasi-humanoids, though even the natural Giant Pedipalps seems  to be more pack-animal than arachnid. Both types exhibit very unusual behaviors. Some are known to create chitin “cairns” in the chambers that they hunt, using the exoskeletons of their previous prey to channel new victims toward where they lie in wait. Others create “gauntlets” in which they herd prey creatures into dead-end rooms where multiple Giant Pedipalps can attack and feast at leisure with reduced risk; these packs often take larger prey, sometimes using wounded victims as bait for larger creatures up to and including the fearsome Skeerders. Despite this complex quasi-social behavior, Qavadakar do not appear to communicate in any way that is recognizable as such. It has been noted by more gifted sages that the creatures have a curious flashing luminescence in the ultraviolet spectrum. 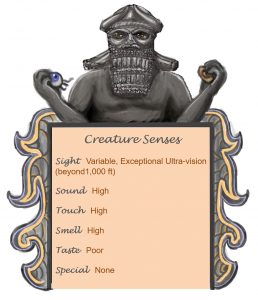 In keeping with their oddball niche amongst their fearsome brethren, Qavadakar have a strange sensory distribution. They are nearly blind in the lower end of the visible spectrum, completely unable to see reds and oranges. The beasts make up for this lack in the violet-UV end of the spectrum, in which they have visual acuity beyond that of even perceptive creatures. Some specimens have been known to intentionally seed their surroundings with fungi that radiate ultraviolet light just to improve their advantage over prey that sees primarily in the visible spectrum. Qavadakar are also adept trackers, using a unique olfactory sensory plate on the underside of their thorax to hunt down wounded victims. They must be skilled in doing so, for Qavadakar toxins are optimized to paralyze arthropods, and do not have the same effects on other types of prey. There are reports of symptoms that range from hypocoagulation and poor healing all the way to terrifying hallucinations and systemic shock. Qavadakar appear to have very good hearing, but since they do not communicate, it is likely used for hunting and defense. Despite their size, the beasts produce relatively little poison at a given time.
Qavadakar do not fill the same predatory niche as their Dire cousins the Dark Vinegaroons. Though capable of taking prey larger than themselves if necessary, they consume mainly the oversized centipedes and isopods that roam the Gossamer like the large herbivores of other worlds. Their cunning hunting methods and ability to 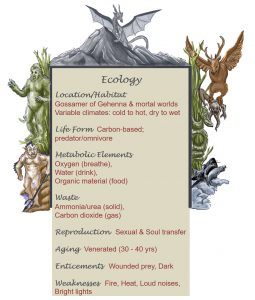 change their surroundings to their own advantage have made this Dire species very successful despite the predation of the Grim Clades, Skeerders, and other large active predators. Their intelligence, though, has led them to another successful and altogether more unusual niche: mounts, guards and hunters for the fearsome Death-Cult Trolls of Khabissol. In this capacity they are better-known (and feared) on dozens of mortal worlds – for the only thing more fearsome than a troll is a troll on a monstrous mount! Fully a third of the estimated total number of Giant Pedipalps are kept by the Spider Queen’s Trolls, and some sages believe that the majority of their quasi-social behavior is transmitted by formerly captive individuals to wild specimens.

Unlike their fiercer cousins and twisted derivatives, well-fed natural Giant Pedipalps are relatively docile creatures under most circumstances. They seem able to understand in at least a rudimentary fashion the advantage of associating with the rapacious Trolls, and the Trolls in turn treat them rather like monstrous dogs. Much more frequently than other groups, Death-Cult Trolls are likely to kidnap victims and leave them alive so that their arachnid pets can implant those unfortunates with gelatinous eggs. The hatchlings provide the Trolls with juvenile Pedipalps and the beautiful music of humanoid screams – a fitting tribute to their fearsome goddess. A group of Death Cultists will have numerous Huge, if not Giant, Pedipalps. Most of the beasts respond to verbal commands in the degenerate Daemon-derived tongue of the Trolls, though a few appear to react to words in Common, or – even more strangely – to Infernal, the clipped language of the Hellion system. Qavadakar are seen with Death Cult tribes less frequently, and one may be a kahuna’s mount or an independent creature that follows the will of the Spider Queen alone. Unlike other Dire creatures, these Dire Pedipalps do not appear to breed true – all are created by Khabissol’s machinations. 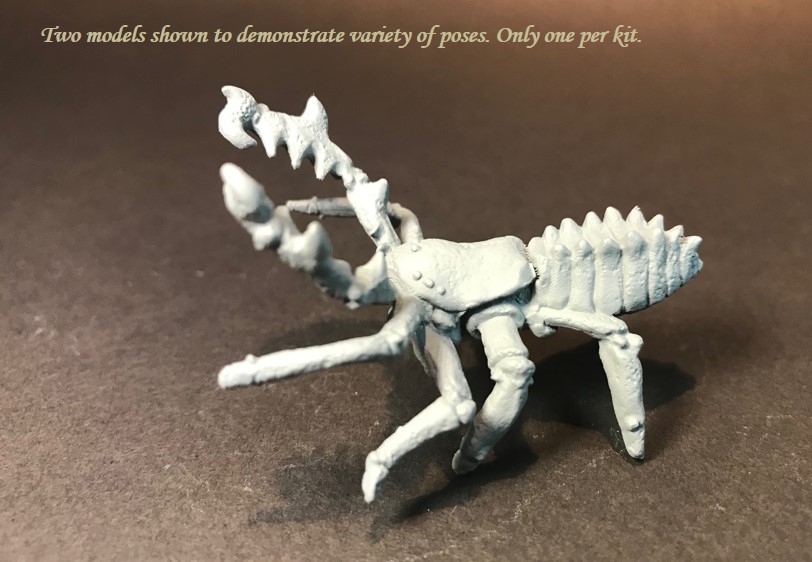 Buy Now
Qavadakar rarely engage in combat in the traditional sense despite their prodigious bulk; as ambush predators they prefer to strike from concealment against singular victims and retreat while their toxins take effect. Confronted by a party of prepared and well-equipped travelers, they are more likely to stay in hiding or to retire unseen than to attack at all. All varieties seem to have a sixth sense for the intent of other beings, and seem to melt into the shadows of the Gossamer when they are being hunted. Some of the Death-Cults make this a point of initiation; Trolls from outside tribes who wish to worship the Spider Queen are taken through a sacred portal to the Gossamer, where they must hunt and tame their own monstrous mounts. It is thought that kahunas are chosen by the size and ferocity of their Giant Pedipalp; those that manage to ride a dire Qavadakar are always kahunas, and some are rumored to draw unholy strength through their mounts from Khabissol herself. 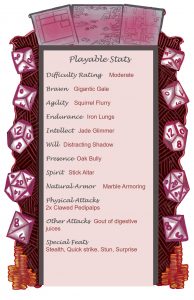 Whether attacking for food or in heated battle with a rider, the modus operandi of the typical Qavadakar is the same: to make one devastating grab-and-bite attack, and leave the victim to die. Troll riders love this tactic for its cruelty, and will often use their great reach to similarly maim other foes while their mount disables the primary target. The pair usually move on while the wounded suffer, and juvenile specimens often follow to administer the coup de grace and start to consume the dead. Troll and arachnid usually share the fleshly spoils of these battles, Trolls tearing away chunks of meat to eat on the spot while the spiderkin wait for their enzymatic secretions to render the organs and bones edible. Since both species work exclusively in darkness, these raids often occur on moonless nights. The Qavadakar themselves are accustomed to the dim quiet of the Gossamer, and do not fare well under the stress of sudden, bright light or sustained cacophony; they may sometimes be driven off like mundane bears with loud confusing noise or an alchemical spotlight.

Qavadakar are typically encountered by mortals in the Gossamer itself, though those mortals that have reason to be there are seldom inclined or able to take time for sight-seeing and zoological pursuits. Like  Skeerders, Qavadakar are sometimes fitted with summoning bands by the more intelligent and successful Kahunas of Khabissol’s cult, but because of the difference of size and expense doing so is considerably less common. The beasts are rarely summoned by mortal mages for the same reason – the materials necessary to scribe a circle that might contain such a large creature is expensive, and because of their relative timidity they are of little use as war-hulks to the typical humanoid wizard. Most will call a Skeerder instead.  The Dire Pedipalp and its base species- of varying sizes and types, up to the Giant Pedipalp- are revered by certain Troll tribes*. In these locales, it would not be surprising to see a pack hunting large mammals or small groups of humanoids. On at least one known world, savage quasi-humanoids revere Dire Qavadakar as avatars of a dark goddess of death or even as gods themselves.