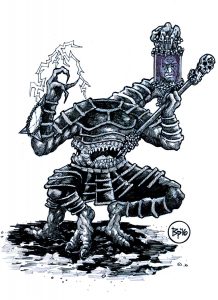 On the desolate planet of Perruush, Bael the Corruptor – an archdevil of broad infamy – wages war against the foes of devil-kind and the servants of the gods.  His sinister cults look to bring down the pious religions of mortal worlds, and to take their faithful back to the fold of Hell. The Clergy of Bael is his foundation of power on Perruush, their ranks filled by mortal “recruits”.  Bael’s cathedrals are prisons of despair – places where souls are broken and minds are reconditioned to embrace the rigid doctrine set forth by Asmodeus himself.  Advancement within this order is based upon despicable acts of corruption.  The most despoiled clergy are elevated to hulking monstrosities, animated by the eldritch power of Positive energy and diabolic technology – mobilized against the enemies of Hell.

The ultimate outcome of this clerical conversion is the adoption of an infernal body, designed by mysterious beings to turn Priests of notorious repute into tyrannical war machines – the Bishops of Bael. Bishops are the masters of Bael’s mighty armies and are sometimes referred to as the Grand Inquisitors, with the physical and magical might necessary to make war upon even the mightiest servants of the Gods. These Unliving fiends are no longer even recognizable as humanoid, exhibiting the unholy tripartite symmetry that their lord prefers. Each has long since lost its identity, retaining only a vague remnant of its former personality and a unique epithet known throughout the Hellion Systems. 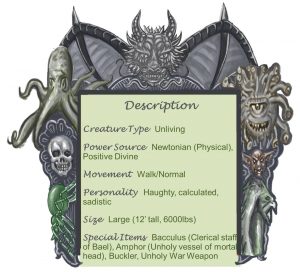 Bael’s clergy go through three distinct phases: the Acolyte, the Priest, and the Bishop. The Priests’ final evolution, the Bishops, tower over their subordinates: when fully erect they stand twice the height of even the tallest Acolyte of Bael. Their bodies are made of artificially-crafted devil flesh covered in a malleable crystalline hide. Despite weighing as much as a team of draft animals, they gracefully move their bulk about the field of battle on three powerful legs. Each also possesses three arms with dexterous talons, and three gaping maws centered upon  their torsos. Their infernal dermis is incredibly hard by mortal standards, and protects them from a wide variety of physical attacks, but most are nevertheless grafted with partial plate armor hewn from the black raw ore mined deep within Perruush. Their flesh and armor alike turn, chip, or even shatter lesser weapons, and they are impervious to damage from anything less than a blessed masterwork.

Bishops are seldom seen away from the surface of Perruush, or even outside of Bael’s palace on the plain of Galen. When they do make an appearance, it is usually to lead a massive campaign against an entire civilization or to personally capture and break an iconic champion of the Divine. Each Bishop specializes in its own range of spells, but most in some way or another concentrate on impeding or crippling the front lines of enemy combatants. Many develop personalized spells to manipulate the foe directly, through potent fear effects or magical pushes and pulls. All are entrusted by Bael himself with a unique item of alien manufacture that is superficially similar to a mirror. This buckler-like object serves to deflect targeted spells aimed at the creature, and sometimes even to reflect them back upon the caster. It is also ringed with three knife-like shanks, making it an effective melee weapon when backed by the Bishops’ prodigious strength. 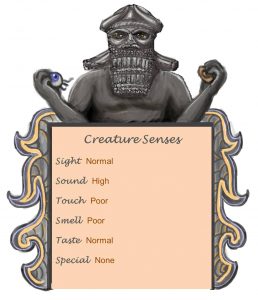 Most use their second hand to carry their Skull Staff, known rightly as a Bacculus in the circles of the most informed – and therefore timorous – mortal Sages. These artifacts act as a focus for their most powerful spellcasting – though they can also utter unholy incantations from each of the three mouths on their torsos.  The third arm carries the mortal head it bore as a Priest, still linked to the Bacculus and shrouded within its Amphor – a crystalline vessel of infernal design.  Often held high over its body like a grotesque lantern, the Bishop’s head surveys the carnage of the battleground and calculates the next several moves, countermoves, and contingencies. The Bacculus remains its main source of sensory input, other than visual acuity of its head.  The mind of a Bishop appears capable of handling numerous complex tasks – such as carrying on in-depth conversations about different subjects with each of its hideous mouths simultaneously.

It is whispered that the Bishops’ Unliving bodies are grown upon a framework of Barbhast Devil body parts lost during battle or mishap, and kept invigorated beneath Bael’s palace.  Seeping the devil-parts in unholy radiation, the process by which the Bishops’ bodies are crafted from the silica-based infernal flesh is long and of great cost. These growth-pits are maintained with stolen technology that bathes the ichorous contents in Positive energy to maintain their regenerative properties. The cyclopean machines that channel the energy are of an origin unknown even to Bael himself, but have sustained his hordes beyond death for centuries. Each body is said to contain only one organ from the former mortal, ensconced in a canopic jar. 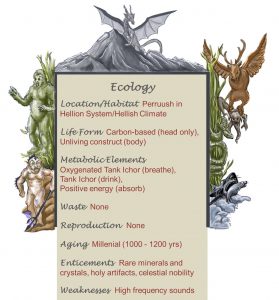 With power comparable to greater devils, there is little the Bishops need fear. Each commands vast numbers of Bael’s soldiers in sprawling campaigns that may last for centuries, and has an expected lifespan to match those goals. Beyond the Corruptor himself, only one servant of Bael outranks them: the mysterious Cardinals. Little is known of these ancient paragons of Hellion might, but to be the “third arm” of the Lord of Silence suggests that they are mighty indeed. Those few that have met a Bishop and survived note that they often pause as if in thought; students of Outsider lore generally believe that the Bishops have a direct mental link to their superiors, though the nature of this link is unknown. There is a legend that after a significant loss against the forces of Heaven a Bishop’s jar-borne head imploded through no apparent cause- perhaps the ultimate price of failure.

In their day-to-day existence Bishops rarely deal with any creature less powerful than advanced Oubliette Devils, their subordinate Priests, or decorated Barbhast Devils. Most have a despotic streak that runs deep, and are prone to calculated rages of the kind that Lord Bael uses to instill unflinching loyalty and quaking fear in lesser creatures. They are widely known to dash out the brains of peons within reach, or even devour the victims of their ire outright. Though their almost entirely artificial bodies need little in the way of nutriment, Bishops are often seen consuming various mineral crystals such as citrine or galena, and often keep one or more Galena Golems on hand specifically to bear trays of perfect crystals that they crunch like petrified grapes. The word of a Bishop is law on Perruush, and none live a life of anything less than extravagant luxury. Their diplomatic genius makes them expert in navigating the treachery of their peers and servants, as well as refilling their coffers as they supply Bael’s war machin 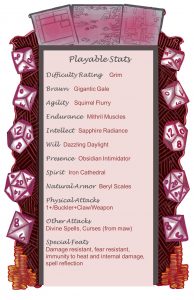 Extraordinarily adept at direct physical altercation, Bishops of Bael do not shrink from any threat. They use their size, speed and overall toughness to press an advantage and put down foes quickly, and without mercy.  They will crush anything smaller than a man under their massive, dense feet, and their reflective bucklers are a lethal slashing tool.  If pressed, they will place their head within a recess between their massive shoulders and conjure a weapon of legendary might.  The exact weapon depends upon the Bishop, but it is rarely anything less than a true unholy relic. Each individual is thought to be tied to the animus of a particular weapon, stored in the ancient vaults beneath Galen, and can call the mighty war tool through a howling incantation of its three mouths.

As impressive as their martial skills are, it is their divine spellcasting that sets Bishops well above the rest of Perruush’s inhabitants.  The fiends can utter up to four incantations simultaneously, one from the Bacculum and one from each of their three mouths. Common tactics include the use of irresistible diabolical commands that set one foe against another, creating crushing gravitational forces to pin weak spellcasters to the earth, or encompassing brutish enemies with a friction-free field so as to neutralize their leverage and strength. Some are also known to gleefully wield their own soldiers as weapons, swinging the creatures until they are bloody bags of broken flesh. Some even use magical force to throw minions directly into enemy ranks, sowing discord whether or not the peon lives.

Like Demons, the Bishops of Bael are difficult to summon.  However, they are nigh-impossible to bribe into service.  At best, they will agree to lead an effort to complete a task. In return, they simply ask the summoner and fellow comrades to take a soul oath to follow their commands diligently. Such contracts are fraught with complex language and subject to extensive fine print. They still enjoy blood and relics as their lesser kindred do, but such paltry offerings are insufficient to entice them to any end greater than sparing the life of their foolhardy conjuror. To convince a Bishop to assist requires as much effort in finding sacrifices as it does to complete the ritual itself- nothing less than a captive angel to drain of ichor or a potent holy artifact will suffice to catch the creature’s attention, and the promise of more must always be forthcoming. Unlike Priests and Acolytes, these mighty monsters also have rather esoteric tastes in food; they may sometimes be successfully offered such strange objects to sup on as large ametrine crystals or thuribles of molten lead in addition to other gifts, and these latter offerings can do much to curry favor. Bishops rarely complete any service personally, preferring to pledge the assistance of subordinates in the hope of finding a loophole in the rules of their service.