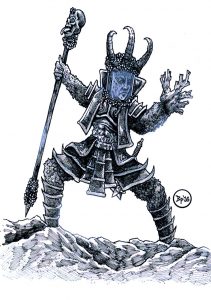 Mortals occupy a unique place in the journey of souls along the Styx; they possess the complexity needed to have free will without the specialization that gives Outsiders their behavioral rigidity. They are the greatest source of change in the cosmos, the greatest potential for nobility – and for evil. It is no surprise, then, that Outsiders of every kind covet the minds and souls of mortal-kind, seeking to channel free will to further their goals. To this end, the Priesthood of Bael warps the flesh and souls of mortal clerics.  In his palace on the wasted world of Perruush, Bael the Corruptor reprograms prisoners of war, inducting them into his personal cult and sending them out to wage war upon the causes of righteousness and the gods they once served.

All of the might of the Hellion Empire exerts itself to expand the cruel, divine perfection of the rule of Asmodeus. So it is that those mortals destined for the Priesthood begin their transformation in the foul cathedrals of Perruush. Each is tortured for weeks, months, or even years, slowly breaking down their resistance to conditioning and their ties to decency and good. They undergo rapid, excruciating healing so that their suffering can continue as quickly as possible. At the end of this process of conversion, those mortals that have not been utterly destroyed are brought before the Elders of the Priesthood to be anointed Acolytes of Bael. 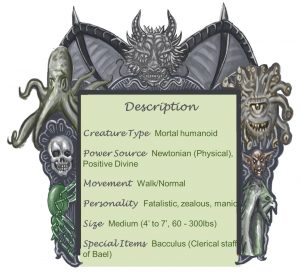 Bael’s Clergy go through three distinct phases: the Acolyte, the Priest, and the Bishop. Acolytes are still mortal and resemble their former selves, at least initially. They maintain a similar height and weight, only slowly accruing tumorous tissue through the mutagenic effects of Perruush’s hellish environment. Each Acolyte is immediately fitted with a leaded glass helm that allows the Acolyte to breathe the sulfurous atmosphere of Perruush, and sends painful tubes into the victim’s blood vessels to filter out the toxins that pervade Bael’s domain. Without such protection, the tyros would be little more than fish flopping on a riverbank.  One iron-hard coil also twines about the Acolyte’s neck, but the purpose of this does not become clear to the unfortunate Acolyte until later. Acolytes are also given scale mail reminiscent of the half-plate worn by their superiors; the style tends to flared, white-painted edges not unlike the scutes on a snake’s belly.

The weak mortal bodies of the Acolytes have little value on Perruush, where only the crystalline-bodied Devils have evolved to thrive amidst its acidic vapors, leaden rivers, and scalding temperatures. The near-constant exposure to healing magic that is necessary to maintain their vigor comes at the price of the slow alteration of their soft tissues and twisting of their bones – changes for the better in the eyes of Bael. When Acolytes die, their bodies are thrown unceremoniously into a tank of Positive energy-infused ichor that eventually resurrects them. After some number of painful rebirths, the Acolytes’ skin toughens with thick, bark-like growths. Such fibrous exoskin causes all to become foul grotesqueries. Their heads seem to be a consistent exception, likely due to the protection of their glassy helms. Acolytes in various stages of corruption may be found amongst the soldiery of Bael, each fulfilling its role as a support soldier as it is able. As their tissues progressively degrade, Acolytes lose more and more of their mobility until they resemble stunted, damaged, even cancerous trees. Eventually a red line begins to appear across the middle of their torsos – perhaps a psychic reflection of their known fate. The elder Priests of Bael then activate the unholy vessels that house their heads, tearing the tubes from their flesh and painfully … slowly … ripping their heads from their bodies.  This decapitation and alteration of their respiratory equipment marks the formal transition of the Acolyte into a full Priest of Bael. 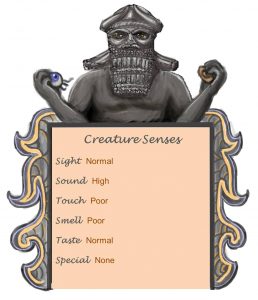 New Acolytes are distinguished from their original humanoid counterparts by their embrace of Bael’s dogma rather than any specific physiological change. After their conversion the poor mortal wretches are forced to remove their own tongues, which are grafted by devilish artifice into the bony mouth of a skull-tipped staff called a Bacculus. The skull itself is rumored to be that of a loved-one which, of course, they are required to murder to complete the initiation.  This grisly artifact becomes the focus of their blasphemous spellcasting. It also is the means by which they communicate, hear and sense – an integral instrument to their survival.  The unnatural sounds emitted by the Bacculus resemble nothing of mortal languages, favoring the buzzes and chirps common to the legions of Imperial Devils. Each also carries a mace-like weapon, based upon the double tetrahedron symbol common to Bael’s cult, which this inferior order uses when forced into the heat of combat; true Priests disdain such lowly soldiers’ tools.

As Acolytes expire from battle-wounds, torture, or the daily trauma of living on Perruush, they are resurrected through the same Positive energy that seethes throughout all Hellion holdfasts.  Each resurrection drives them deeper into depravity and wears down the integrity of their body. They eventually start to require modifications to continue their function, and Priests may culture each Acolyte’s tissues in huge vats to generate replacement limbs or even organs; for even the lowliest Acolyte, after all, is something of an investment for the Priesthood once it has made its conversion. Surgery is performed routinely by the nimble, branch-like appendages of the Priests of Bael in the bowels of his cathedrals, after which vat-ichor regenerates the Acolytes to what passes for fighting trim in short order. 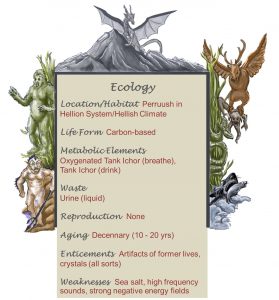 Despite their abstract value, Acolytes are the lowest of the low on Perruush, barely more valuable than slaves and the bestial Drones. They are not simply discarded- Hell is all about investment and dividends- but neither are they respected. Acolytes are initially dispatched in small groups that support larger, Priest-led units as expendable healers of the Imperial Devil troops. The upper echelons of the Priesthood treat Acolytes like vermin when they are not actively torturing them. Those that show too little pliability are eaten, body and soul, by the Bishops of Bael. Bael’s normal soldiers, on the other hand, regard the Acolytes mostly with strong suspicion; they are, after all, associated with the Priests that command the legions. More powerful devils treat them with contemptuous disdain for their mewling weakness, or even outright hostility for the authority that they represent. Most Acolytes are assassinated at least once before they attain priesthood. The priesthood can track all Acolytes, so few are lost when they are left to rot in the galena-lined ditches of Perruush’s wasteland. Fewer still of their murderers are punished, however- Hell cares little who wields the knife against the weak.

As the initiates develop and mutate, they gain little respect beyond that which they are afforded at the outset, but they spend less and less time amongst the common soldiery. As their corruption nears completion they begin to gravitate toward one of the two “orders” of the Priesthood- the “Oppressors” and the “Executioners”. Their grasp of the foul magics that are their specialty expands, though their raw power does not. The former group concentrates on the attainment of tactical acumen, seeking to lead Bael’s armies to grand victories on the field- and to command their erstwhile tormentors amongst the ranks. The latter become more cloistered, learning the arcane details of torture and pain. They are bound for the path of the inquisitor and the spy, as well as the corrupting evangelism for which Perruush is so well known. The Executioners eventually cease to be seen on the surface almost entirely, developing pale squamous flesh and an aversion to even the dim red sunlight of the surface. Both groups gradually cease to be sent out with the legions in favor of their more advanced learning. 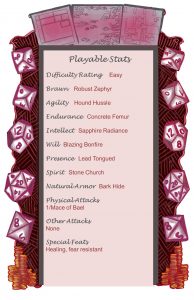 On the battlefield, or within a larger group of infernal types, the Acolytes are most often given to the role of the local healer, keeping the large contingents of Bael’s force healthy and focused.  They have limited offensive capability with their unholy maces, as most of their divine spells are defensive in nature. They are encouraged to use their blood as the components of healing spells – their ichor is infused with traces of the Positive energy to which they are constantly exposed, and even without magical augmentation allows them to sacrifice their own health to sustain other devils regardless of the subject’s anatomy. Sustained by their indoctrination and the knowledge that they will be resurrected, Acolytes often intentionally expire in combat through exsanguination while healing their charges- who in turn haul the pale corpses back to their Cathedrals for repair.

Acolytes are seldom seen away from Perruush except on the Priesthood’s business, if only because they are generally too useless to summon- almost any task to which they might be set would be just as effectively achieved by a cleric, and with less effort and risk. Those that are encountered off-world are usually in the entourage of a Hellion cleric (not just Bael’s) or a Bishop, as servants somewhat more trustworthy than the treacherous melting pot of other fiends that Hell has to offer. Between fanaticism and constant exposure to suffering, Acolytes are not much inclined to flee even the worst battles. A few have even been fitted with surgically-implanted shaped-charge explosive to take down enemy fortifications, or infected with powerful diseases and launched like catapult stones into enemy holdfasts, to be reclaimed and reanimated after the structure is taken. Those few that are sane enough to speak and willing to do so are invariably fatalistic zealots with little information of value.