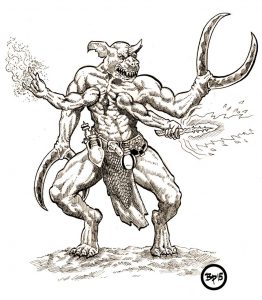 Few planets in the fog of the Abyss are anything less than frigid and torturous worlds of cold and poison. Malagat is one exception – or rather seems to be so. The planet and its immediate environs are inexplicably conducive to the creation and preservation of illusions and enchantments. Any arcane magic of those schools cast on or near the planet lingers as if it has been made reality, and those few mortals that have returned therefrom speak of walking within their own dreams and nightmares.

The planet’s surface is bewilderingly varied, with great expanses of hallucinatory but nevertheless deadly terrain. Malagat is home to the Canisrezu demons, also called the Shards of Thesshalar- the fractal children of entrapped demon lord Scathrezu Halar, the Smoking Mirror. Attempting to reach Malagat is difficult without specialized knowledge, as the planet appears different on each visit and even to each observer. Visitors come despite the dangers to retrieve whisperdust – a coveted spellcasting aid that extends the duration and intensity of charms and illusions.

Evolved in a place made of, and ruled by, nightmares and hallucinations, it is no wonder that Malagat’s creatures are strange even by the standards of the Abyss. Many exist in a state of semi-reality, a sort of overlap of probability and possibility, which is nevertheless real enough to let them eat mortal bodies and spirits. Dreamsnakes, the Crawling Entendre, and even the personified shapes of humanoid fears may be found swimming or crawling through the dreamscape. All acknowledge the 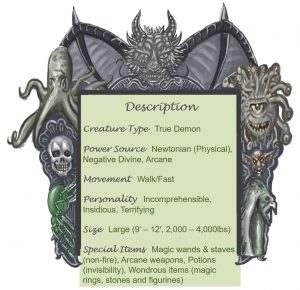 Canisrezu as the biggest predators therein. The Shards, as they call themselves, are not truly a species but a type. Though all bear roughly the same physiological characteristics, each is subtly different in personality, outlook, and general madness.

Canisrezu are imposing figures of demon-kind, towering above most mortals and their weak ilk at over ten feet tall and weighing as much as a huge draft horse. All bear more than two arms, one set a hulking and muscular arrangement seemingly torn from a giant scorpion and the other the more recognizably clawed digits of a humanoid. Like most true demons, Canisrezu exhibit significant variation of characteristics within this type. A significant minority possesses one fewer arm than their brethren, and each demon’s mastiff-like head is topped by one or more horns. Skin color is perhaps the most unpredictable trait of all, each demon having a unique hue from black or violet all the way to burgundy or even mauve.

Whenever its mouth is open, an unending stream of whispers can be heard in the minds of all who view the beast. A disquieting phenomenon in itself, these utterances are at first a babble, but slowly take the form of unspeakable instructions and insidious lies fully understandable to the victim. Those few who have survived an encounter with a Shard name this as the most terrifying aspect of the creature. 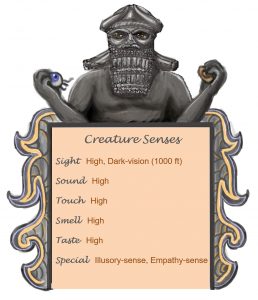 Canisrezu are easy to summon for creatures of their relative might. Stabilized ectoplasm and embalming fluid are the preferred diagram materials. More than most other demons, the Shards abhor full sunlight and heat, preferring cold, dank caverns and the quiet of the undead. Once summoned, their preferred offering is the flesh of deliquescing corpses and of the undead. Only the most powerful conjurers attempt the rites required, but even so mistakes are easily made- and demons are ever ready to capitalize.

Once freed from their bonds, Canisrezu generally create or adopt lairs in cave complexes, usually using their phasing abilities to establish themselves in chambers that are otherwise inaccessible. They often create “altars” to themselves in less remote chambers, where they can go to feed. They often line the walls, floors, and even ceilings of their lairs with reflective metal, polished stone, or ice that they may use their phasing abilities to reach through the reflections. Most raise or acquire undead minions, to avoid the heat that the living would bring to their lairs. They set the ghasts and zombies that they favor to grave-robbing, or even taking corpses from mortuaries. Meanwhile, their subtle influence sends the surrounding populace into a downward spiral of madness, and the demon selects particular individuals of importance to actively corrupt. Where there is great opportunity to bring ruin or especial resistance to their influence, Canisrezu have been known to summon another of their kind; though a rare occurrence, the proximity of two Shards creates illusions so powerful that they can actually warp reality. 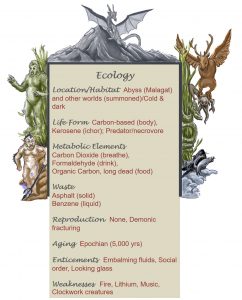 Canisrezu are at once the most recognizably mad and least behaviorally chaotic of the true demon types. Their powerful auras warp sentient minds around them, or even reality itself, to reflect the madness within. This insanity is tempered by a gift for the intricate and deadly secrets of the arcane. All possess a powerful empathic sense, and are able to detect and influence minds far from their lairs. The mechanism of this ability is unknown, psychic phenomena being few and far between on most worlds, outside of the strictly bordered realm of enchantment magic. These traits taken together make Shards less likely to engage in the horrific rampages of their lesser brethren and incline them to the sweeping corruption of entire towns and countries for which they are better known.

Canisrezu are, for all their power, one of the most common demons seen outside of the Abyss after the Vreek’k and the Slaazrou. The nature of these demons brings them often to mortal worlds; a botched summoning rarely results in an empty circle, the fiends preferring to appear regardless and allow their would-be conjurer to think briefly that the trap has been sprung. Though they lack the enthusiasm for savagery that most other true demons possess, Shards bring a subtler evil, for they pull with them the madness of their dream-spun world.

True demons are too difficult to hold in thrall for much more than to be aimed in a direction, and this holds doubly true for the Shards. One unleashed begins to pollute its psychic surroundings like a dead adder in an oasis, slowly warping minds for miles around into twisted and evil shapes, spreading chaos and death. Though easy to call, they are difficult too to dismiss. A single Canisrezu may linger on a mortal planet for years, unwilling to leave until every mind that it can sense is twisted into psychosis or crushed into catatonia, thriving while kingdoms and faiths crumble around them. 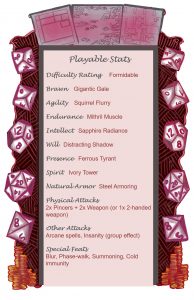 Canisrezu are steel-skinned juggernauts, and they know it. Though they rarely have the need or desire to engage in physical combat, when they do these demons wade in with sadistic glee and great enthusiasm. Most treat combat as a lark, recognizing that few mortal-made objects are even capable of piercing their hide – and that fewer still are the mortals with the wherewithal to wield those weapons effectively against them. Their combat style usually resembles a cat toying with a wounded mouse, with the fiends using potions of invisibility and their unique power over reflections to terrorize and finally brutally end their would-be slayers.

On the rare occasions that they are forced into pitched battle, Canisrezu show great tactical ability in choosing their ground, normally engaging foes in their own lairs. Each wields a two-handed weapon or magic objects in its humanoid hands, using them to deadly effect while it throws out mighty swings with its huge claws. The demon often uses reflections to bounce missed spells or to change the direction of its strikes. Like other true demons and perhaps even more so, Canisrezu prefer to take a blow that leaves an opening in their opponent’s defenses rather than blocking, trusting their toughened hide to keep them from harm. If overpowered, they are likely to use their phasing ability to flee into the solid stone around their lairs.

Unusual among true demons, Canisrezu often employ magical items to supplement their talent for the arcane. Most wield some manner of rod, staff, or wand in conjunction with two-handed weapons. Favorites are wands of cone of cold or staves of illusion; many also use personal protective items such as rings of flame protection and potions of invisibility. Regardless of the tools that they employ, their passive hallucinatory auras are a potent aid in any combat.

As demons of greater complexity, Canisrezu are significantly more sensitive to the psychic resonances of order in the abstract as well as more concrete manifestations thereof. Clockwork repels them- an intervention cadre of low-grade Modrons forced a Shard to retreat from a Mechanus-controlled planet and eliminated the population’s collective psychosis in under a week. Dispater’s only known combat in person was with a Canisrezu – concluded with one blow from his Axiomatic Mace.