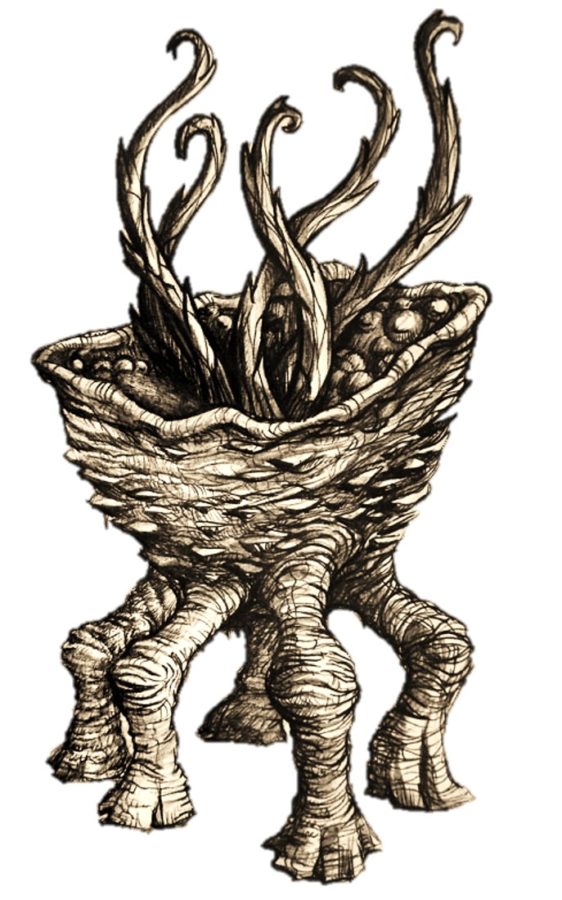 Phantom Fungus are nigh-legendary monstrosities, part real and part nightmare. They wander the ghostly realms adjacent to our own, spying through the veil, waiting to crawl into the dreams of mortals and scoop out their souls like the pith of rotten fruit. Simply referred to as “Dreamwalkers” by many races throughout the Depths, this most corrupted of Basidirond forms have bodies like great chalices, filled with toxic, mind-melting slime and the pitiful souls of their victims. Just one Dreamwalker is dire enough to threaten whole communities, and few have the resources or expertise to combat them. 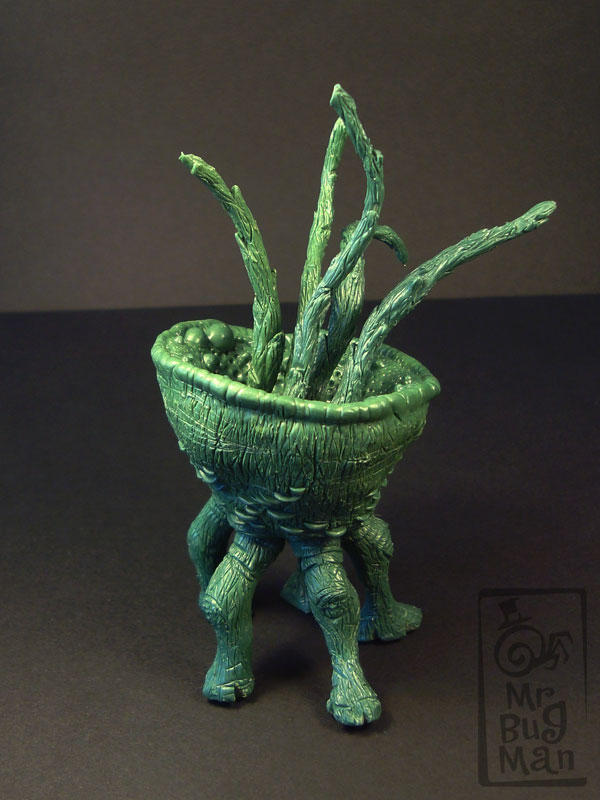 As three hags make a coven, so do the Queen’s Basidironds live as three. When the Daemoness wipes them away like so much old clay and molds them again, she must find the irony delicious; instead of a coven, they are joined to form a cauldron. This transmuted structure makes the resultant Phantom Fungus more sublime than the average Basidirond; they keep the strange, multi-legged gait and the lashing tendrils, both in sets of five rather than threes, but lose the grinding maws. For Dreamwalkers have no need for teeth — their cauldrons rend the soul.

Dreamwalkers kill for entertainment. They wander the Depths tirelessly, occasionally phasing into our reality and slaughtering the living when they find a victim that’s capable of producing delicious screams. But it’s the way that they collect souls that’s truly terrifying. Like the infamous Night Hags, they stalk their prey in the night, touching them with ethereal tendrils and invading their very dreams. With this fell touch, they slowly detach the soul from the body — eventually killing their victims and dragging their souls from dream to ether to cauldron, where it is forever devoured. Night Hags, for their part, loathe Dreamwalkers; they consider them a mockery, or even an open insult.

For all that they prefer terror, stalking, and psychological torture, they are no easy target for lance or bow. They can disable whole hunting parties with thick, mind-scrambling fog, suborn the unwilling to their will, and even conjure a sentient being’s worst nightmares from the undercurrents of dream. They take great pleasure in ambushing, especially those that attempt to hunt them. They materialize, sow discord and confusion, and only then begin to snatch the souls within this chaos. Any creature left alive is bashed and dashed against the cold stone until it’s naught but a gory smear.

As with all great monsters, there are many stories of ways to kill them — or at least, to keep them at bay. Certain peoples believe that they may be fought in the very dreams that they invade, with the aid of psychic mushroom preparations and blessed weapons. Others shed treasure and blood to the gods of sleep and dreaming, trying to keep the Dreamwalkers away. Some send out hunting parties, guided by a spiritual leader and fed stimulants to prevent sleep. A few even say that tipping the cauldron to drain all of the souls would kill the beasts, but fewer still would be brash enough to try. None of these stories are commonly discussed, since the Dreamwalkers themselves are so rare, but every enclave of the Depths has an elder who knows of them and has heard the tales. Wise travelers will take precautions nevertheless when phantom tendrils are glimpsed on heavy eyelid. 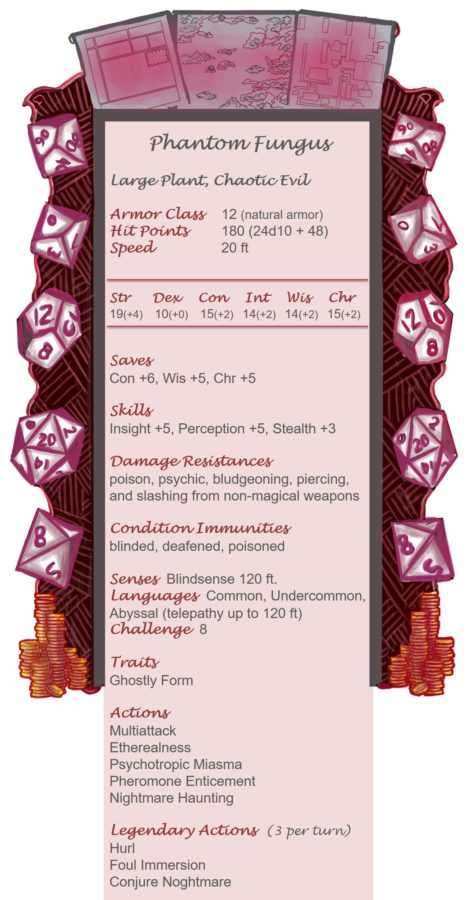 Multiattack. The Phantom Fungus makes up to three Tentacle attacks.

Tentacle. Melee weapon attack: +7 to hit, reach 10 ft., one creature. 13 (2d8 + 4) bludgeoning damage and target is Grappled (escape DC 15). The Phantom Fungus has advantage on Tentacle attacks against creatures that it is grappling.

Etherealness. The Phantom Fungus enters the Ethereal Plane from the Material Plane, or vice versa.

Psychotropic Miasma (Recharge 6). The Phantom Fungus’s cauldron gushes a heavy, mind-altering fog that rapidly spreads from its cauldron. Creatures within 20 feet of the Phantom Fungus must make a DC 16 Constitution saving throw or suffer the effects of the Confusion spell for one minute.

Pheromone Enticement (1/Day). The Phantom Fungus releases a cloud of subtle pheromones. Creatures within 20 feet must make a DC 16 Constitution saving throw or be Charmed by the Phantom Fungus for one minute. A creature that makes its save is immune to this effect for 24 hours.

Hurl. (1 action). The Phantom Fungus throws a creature that it’s grappling. The creature is tossed up to 20 feet, and must make a DC 15 Dexterity saving throw or take 14 (4d6) bludgeoning damage and land Prone. On a successful save, the creature takes half as much damage and isn’t knocked Prone.

Foul Immersion (2 actions). The Phantom Fungus forces a creature that it’s grappling into its cauldron. The creature must make a DC 15 Strength saving throw or be drenched in psychotropic fluids. While it’s within the cauldron, it takes 11 (3d6) acid damage at the beginning of each of its turns. The pain and psychic trauma make it almost impossible to escape–a creature trapped within the cauldron is subjected to the Psychotropic Miasma effect above, though it may make a saving throw at the beginning of each of its turns to end the effect. A trapped creature may only attempt to escape if it can act normally under the confusion effect or if it makes its save. The cauldron can only fit one Medium or two Small creatures at a time, and the Phantom Fungus will remove corpses from its cauldron so that it can fit more. Creatures that die in the cauldron have their souls trapped therein; they can only be resurrected via Wish or similar powerful magic.

Conjure Nightmare (3 actions). The Phantom Fungus chooses one creature within range of its Blindsense. That creature is subjected to a manifestation of its worst nightmares, as the Phantasmal Killer spell.