Larval Souls Larvae of the Shaetemmu 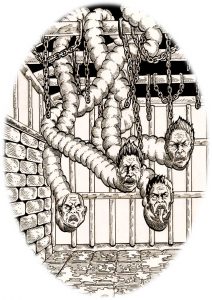 Amongst the Outer Systems, there are no unified currencies as are in the kingdoms of Veldon. More than anything else, Outsiders and the great outer empires barter for goods and favors. Rare metals and blood, slaves and secrets, even mortal souls are the stuff of trade. The only race with the knowledge and ability to grasp a soul in the Physical Universe are the Shaetemmu (also known as Midnight Hags, Grey Ones or Witches of Hades) — and the medium in which they trade is the Larva. Larvae are not normally traded with mortals at all. Moral qualms aside, Larvae and the souls that they enflesh are simply priced outside of the market range for most mortals, or even mortal kingdoms. Even the foulest mages could rarely, if asked, tell another the right price to pay for a fellow soul.

Larvae and Lemures are cousins. Lemures are the manifestations in Hades of the weakest souls that pass through the Halls of Glass. The problem with Lemures is their form; a weak soul creates a weak body, barely even coherent enough to be called such. The Midnight Hags fix this problem with a mechanism as mysterious as it is entirely unique to that powerful species – a type of reverse birth referred to in the darkest circles as “tavallo”. Midnight Hags absorb lemurian souls (and sometimes even bare mortal souls directly) transforming the souls into the tractable Larvae. Though the exact changes that the process makes are not known to mortal sages, it is notable that Larvae appear to be significantly more susceptible to transmutational magics than normal creatures, and Outsiders sometimes store them in strange shapes such as coils of rope or links in a chain. 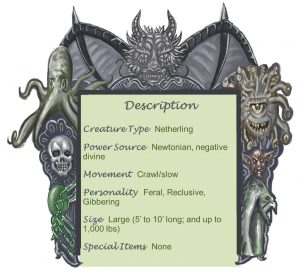 Larvae resemble nothing so much as huge, segmented worms with humanoid faces. From nose to tail, the length measures about the height of a Firbolg. Each retains a twisted approximation of the face it bore in life, though the trauma of transition from mortality to bodied soul almost invariably destroys any sense of former identity. Though their exoskin is supple to the touch, and the creatures appear to be delicate, Larvae are extremely dense. Each Larval Soul can weigh as much as a smallish giant, and they are thus seldom entrusted to any other than powerful undead minions.

Larvae are notoriously difficult to handle because of the slick layer of slime that coats their disgusting, pale flesh. When exposed to bare skin, this slime may elicit effects ranging variously from poisonous to euphoric to caustic, but most commonly soporific. For this reason, Shaetemmu slaves are given special gloves to grip the creatures’ skin. Some Larvae have colored markings, but this phenomenon is largely considered inconsequential and the reason for it is unknown. Larvae are incapable of speech, but are often known to grunt mindlessly or utter disjointed syllables from languages that they knew in their previous lives. 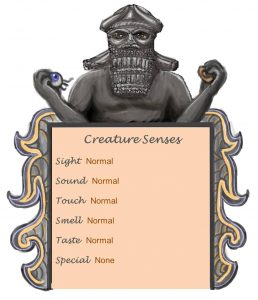 Since the Shaetemmu create Larvae, a Midnight Hag is always able to inexplicably produce one if negotiations proceed favorably. Otherwise, they are most often found in the coffers of some Outer Realm lord. On the Hellion planets, they are commonly kept in huge pits, and allowed to writhe in piles until there is a use for them. The pits are “fertilized” and wreathed in sharp downward-facing tines to prevent escape, but through some combination of laziness, stupidity, or poor climbing ability the tines are rarely necessary. The Death Masters of Hades accumulate the largest Larval stock piles by a wide margin, their empires crawling with millions, or perhaps billions. When they are being transported by the Shaetemmu, often for some local Death Master, they are snugged into the walls of witch-vessel holds, in coiling chambers like the intestines of a great beast. Each is fitted into a socket that holds it firmly by the tail and allows it head to move freely. During transport the chambers are filled with sulfur hexaflouride, a dense gas that sedates the creatures and allows their bodies to float unhindered.

Sustained by just a trickle of Negative energy, Larvae require little in the way of sustenance. This is generally considered what makes them so useful and valuable – an endless, mutable, source of energy to power the kingdoms of the depraved. When they are “fed” it is generally egesta, offal, or the foul saliva of beasts. This is often done to induce a particular reaction or condition throughout a Larval strongbox. In some cases, it has been used as a method of particularly gruesome execution; prisoners are bound hand and foot and cast into a pit with other organic matter to be slowly and inefficiently consumed. 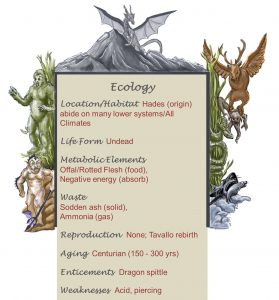 Though the bodies of Larvae do not naturally diminish over time, they cannot survive on their own in any environment that is rife with predators. Other than predation, however, they are remarkably tough. Because of their priceless nature, one simply does not find feral Larvae in any locale – they are always kept under “lock and key”, carefully counted and recounted on a regular basis. For this reason there is no information on whether or not a group of Larvae would, or even could, have the underlying instincts, or survival techniques such as schooling.

Their metabolic functions are more or less unaffected by the strange substances found on Outer worlds, but their physical vulnerability far outweighs their chemical resilience. An exception is strong acid, such as aqua regia; Larvae kept on the ruined worlds where acid rain is common are often put into impervious “sleeves” for safekeeping. On the other hand, they respond well to caustic compounds, and most Outer Lords that collect and exploit Larvae employ the simple security expedient of keeping them in giant containers of caustic soda or lye. This doesn’t harm the Larvae but keeps out fleshly intruders- and other treasures are often found at the bottom, under perhaps fifty layers of biting mouths and alkaline poisons. 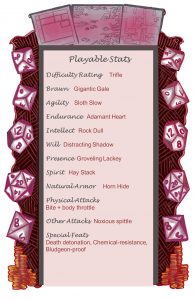 Though they lack their memories and minds, Larvae are not entirely vacuous. They demonstrate a slow awareness similar to their Lemurian kin, reacting to pain and danger. Since a Larva’s movement amounts to the slow locomotion of an inchworm and their means of self-defense a bit of fervent thrashing, they do not engage in combat. They seem to sense on some level that they are nearly helpless; a Larva will attempt to squirm away from any creature that exceeds its own size, and they will never attack a creature that appears to be threat. Larvae have no natural weapons to speak of, and are only able to deal damage to other creatures in the form of a bite or a hard, yet awkward knock from its heavy body. The bite is similar to that which their mortal bodies would have possessed and only resort this method of attack if cornered or highly agitated. It is important to note, that the saliva of each population of Larvae can vary considerably, and produce a wide variety of effects. So it is best to avoid its gnashing teeth unless one is certain of resistance to pertussis, chemical burns, or any one of numerous toxins.

A Larva’s death throes are actually more dangerous than a healthy specimen. Part of the rebirth process is the compression of the component Lemure, which creates their strong but pliable chitinous shell. Within, their rudimentary organs are under significant pressure. They appear to be impervious to bludgeoning damage; their density, malleability, and slimy excretion work to their advantage. However, piercing a Larva’s outer carapace causes them to explode and deals significant concussive damage to those nearby and to their surroundings. Depending upon their unique physiology, the explosive decompression may also spread horrific poison or cause chemical burns or other splash- and gas-related damage. Witch-vessel holds are specially compartmentalized to deal with this very issue; each segment contains up to one hundred Larvae and is its own separate pressurization chamber that automatically seals itself should the systems register a pressure spike. The creatures themselves, therefore, are at most an inconvenience when unmolested- but woe betide the incautious thief!