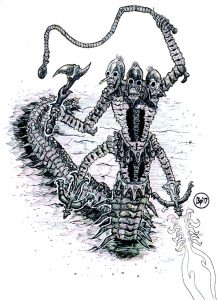 Every trader, from the meanest purveyor of bits and baubles to the grandest merchant prince, must guard their wares and their person from those who would take what they possess. The Midnight Hags are no exception. As the value of the goods to trade increases, though, so too must the quality of its keepers. Hags employ sophisticated technology, traps, and mercenary help – but their last and best guards are a menagerie of necro-mantic creations. Most of all, they rely upon their enormous Undead bodyguards, sculpted from the dessicated flesh of various humanoid species using esoteric processes that are elsewhere unknown. These monstrosities act as sentinels for the Midnight Hags in all of their trading ventures.

Among those Hags that are known by name, Mekhet the Knife is alone in her use of Troll-flesh. She is unusual amongst her kind in her adherence to a strategy of deep investment in a few, powerful undead constructs. Her macabre work is well-known in the Outer Realms for painstaking precision, twisted beauty, and horrifying expense. Though she sometimes sells her more generic work, Mekhet is infamous for the bodyguards that she keeps so jealously – the Ixatopf. No one knows if she refuses to sell for pride, for greed, or for fear of reverse engineering, but no Ixatopf has ever been available for purchase or trade on the open market. Like the related Ixatomma, Ixapixyl and other Chilopodic Undead, Ixatopf are stunning examples of necromantic craft.

Standing nearly twice as tall as their component Trolls, Ixatopf tower over their wards. Each is constructed by Mekhet personally with the components of five or more Trolls set end-to-end, and the artistry shown therein is sufficient that they appear to be one creature raised from the dead. Each torso is hollowed – the entrails presumably taken for some equally nefarious use – and melded

seamlessly. Bare muscle and sinew are visible within the cavernous ribcages of every Ixatopf, contracting just as they did in life. Most have three heads, recognizably trollish but gaunt in the manner of typical Undead. Empty eye sockets give a vacant air to the creatures, making them appear to be docile and zombie-like – until they strike.

Even more impressive than their construction is the manner in which Mekhet has overcome the mutually inimical natures of the Positive and Negative energies that seethe within the Ixatopf body. While Negative forces animate the creatures like other Undead, the Hag’s arcane artistry allows the Positive energy within the flesh of the Trolls to linger after their reanimation. Even the manner in which the Trolls are slain is a mystery, since most would-be Troll slayers find it necessary to burn or dissolve the flesh to make the slaying stick. This marrying of energies has a curious effect upon the flesh itself. Ixatopf still regenerate, albeit much more slowly than their living counterparts. Unlike those simple creatures, their bodies regrow differently after they sustain damage, and the tissues slowly shrivel until their flesh resembles thick bark. This transformation goes all the way to their brown-tinged bones, making them much tougher than the original Trolls. Dead Ixatopf still stiffen and mineralize, but the lingering influence of Negative energy crumbles them to dust soon thereafter. Just as the circulation of blood is weaker in a mortal’s limbs, so too does Positive energy flow more weakly in an Ixatopf’s extremities; many have hands or feet that look almost skeletal, slowly withering as the Negative energy wastes away the flesh.

Most Ixatopf retain the senses of their component Trolls, and are thus endowed with an extraordinary ability to
smell a broad range of odors and at levels far beyond hunting dogs. Some are made from Trolls with unusual sensory apparatus, and Mekhet is careful to preserve these faculties 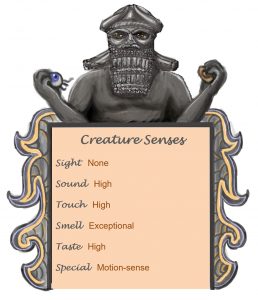 – even adding supplementary technology to enhance them. Ixatopf with echolocation-like senses or sensitivity to electric energy fields have been observed in her entourages.  The mutual annihilation of Positive and Negative energy causes the creatures to glow softly green in the dark, making them much less adept at stealth than Trolls despite their natural silence. Some sages speculate that this radiation is harmful, but such effects have never been proven; stories of their bearing “wasting diseases” or other maladies persist nevertheless. A notable exception to the senses of the monsters’ Troll forebears is the aforementioned lack of sight. The remnants of neural activity and the radiation that their bodies emit fills the Ixatopf’s empty sockets with a soft, eerie glow, but are otherwise useless. To compensate, their very skin has been turned into a simple visual organ, with pores sensitive to broad changes in light levels. This sensitivity makes them very difficult to surprise despite its imprecise character. Most have highly-developed hearing and proprioception, which allow them to respond to the sub-vocal commands of Mekhet and to target hearts and other vascular structures by sound alone.

Despite their origins, Ixatopf are more like advanced weapons than rapacious predators. Since they do not require sustenance in the traditional sense, they are unperturbed by years of uninterrupted guard duty or rounds through Witchvessel holds. Mekhet’s tight control has been known to waver at great distances, however. During such lapses Ixatopf have been known to fly into murderous rages, tearing passengers or mortal slaves apart and “consuming” them in a repugnant mockery of their half-remembered hunger from life. These rages – and Ixatopf flesh itself – feed a unique variety of Undead-eating beetle-like vermin common throughout the Underverse, not unlike the common wood-boring insect known to 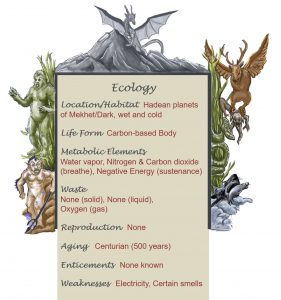 mortals. These tiny creatures bore pinpoint holes into their Undead hosts’ leathery tissues, sustaining themselves upon a poor food supply bolstered by scraps of Negative energy. The pests seem to do little damage overall, and thus Mekhet tolerates them. When Ixatopf leave fresh meat on the Witchvessel decks, the beetles take the opportunity and reproduce prolifically – sometimes coating a bulkhead with a seething swarm. These insects are suspected by sages to transmit a cancerous “disease” by merit of their Positive energy exposure. The seminal (posthumously published) work of Biomancer Kaan Dran hypothesized that these beetles also burrow into the Ixatopf brain to trigger the rages that allow them reproductive opportunities. Dran dubbed these vermin Neux, and his corpse provided the only recorded specimen for study.

The source of Troll flesh in Hades is generally believed to be a long-standing and lucrative trade agreement between the Daemon paragon Khabissol – of Gossamer infamy – and Mekhet. Whether this deal is exclusive to that being or is extended to one or more covens of the Midnight Hags is unknown; certainly Troll flesh has been seen occasionally in other Hag-made Undead. Many suspect that the Midnight Hags are Khabissol’s primary source of slaves and souls, but this too is largely speculation. The process by which Khabissol creates the dreaded Grim Clade of arachnoid creatures (for which she is so well known) requires a huge quantity of both, and souls especially are notoriously difficult to procure by other means. Mekhet’s paranoia makes her largely unknowable in and of herself, though tales nevertheless persist of Ixatopf among the teeming mercenary masses of Gehenna or in the gloaming caverns of the elusive Demodand tyrants.

Ixatopf are dauntless. They lack the superstitions and often (depending upon their component specimens) some of the vulnerabilities of their progenitor flesh. They almost always fight to the death.  By contrast, Mekhet is careful that her master creations deliver precise, measured violence, and keeps them under strict control. Their bodies are trimmed of everything but bare necessities, and their martial prowess bolstered by careful systematic synaptic stimulation; like the combat drills of more primitive peoples, this “nerve training” gives Ixatopf a significant advantage over other, untrained monstrosities. Most are equipped with advanced weapons by their mistress, simple but deadly implements meant to enhance their wielders without relying upon intellect. Bone clubs or flails with arcane “accelerator boosters”, alien crossbows that blast light or spit fire, and small thrown explosives are all common. The latter are uniquely suited to Ixatopf, who can use the grenade-like implements fearlessly at close quarters. Despite their prowess, Ixatopf seem to have no grasp of true tactical thinking; their responses are efficient but made by rote. This behavior changes dramatically in Mekhet’s presence; near her person, the creatures fight so effectively in tandem that the Knife is rumored to possess some eldritch equipment that allows her to issue her bodyguards commands by thought alone. In the heat of battle, a lack of vital organs and tough flesh make Ixatopf nigh-impossible to kill … or even to incapacitate. They are almost invulnerable to bludgeoning damage, and extremely resistant to piercing blows from arrows, spear points, bullet or shrapnel effects. Only magical blades consistently cause the creatures true harm, and even then their regeneration keeps them alive. 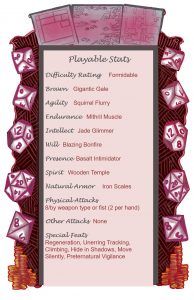 Ixatopf are usually resistant to fire, though it does still slow or halt their healing ability. Similarly, acid is less effective on their hardened skin; the minimal study of a few skin samples by scholars suggest that caustic soda or other such alkaline substances might achieve a comparable effect. They are also nearly oblivious to their surroundings, a trait that may be leveraged to the advantage of the canny adversary – since they respond only to predetermined stimuli, they may be avoided with sufficient forewarning and preparation. The only caution that Ixatopf have been seen to exhibit is to avoid destroying cargo, especially the fabulously valuable Larval Souls of their master. Presented with intruders in a Witchvessel’s cargo hold, Ixatopf reach into their own chest cavities and pluck the largest muscles like lute strings, producing a deafening sound like that of firecrackers. They may be joined in their defense of the vessel by any number of mercenaries and other Undead, though they do not change their strategy to reflect these superior numbers.

Mekhet’s arsenal includes a number of variant Chilopodic Undead. These lesser forms may be made from the flesh of Bugbears or Ogres, and are consequently larger or smaller than a Trollpede proper. Mekhet’s purpose in building these anomalies is as inscrutable as she is herself. The smaller, Bugbear-based type is conditioned in much the same way as larger specimens, given image-based triggers, and used with more intelligent “handlers” in assassinations. The Ogre type is more unusual still, kept in Mekhet’s stronghold in silent readiness for an assault on her fortress. Both types are comparatively rare, and though they exhibit similar traits they lack the regenerative powers, extraordinarily durable hide, and general utility of their Trollish counterparts.

Ixatopf are almost always encountered in Witchvessels, and most commonly near Mekhet herself. Despite the prohibitive cost of their construction, the Hag treats them as expendable foot-soldiers – a Hag, after all, is nothing if not an exemplar of self-interest. They are rarely seen together; the paranoia of the Shaetemmu leads them to keep their assets somewhat separated in case of attack. Those brash enough to seek Mekhet in her own domain are likely to encounter those few Ogre-variants that she has left behind, assigned and kept close to their Knepf overseers in her absence. Knepf do not have the ability to issue the Ixatopf commands – again, a precaution against treachery – but usually keep them in well-travelled areas to wait for intruders. Some roam free, since Hades proper is so inhospitable to mortal-kind that no living slaves are kept therein. No specimen has ever been kept by a reputable institution for study, though some sages claim to have had an opportunity on Witchvessels. Such stories usually amount to little more than descriptions and behavioral analyses, though one curious report suggests that when softened their flesh becomes leathery and tastes like jerky. Ixatopf have never been successfully summoned, and few would try for fear of Mekhet’s ire.