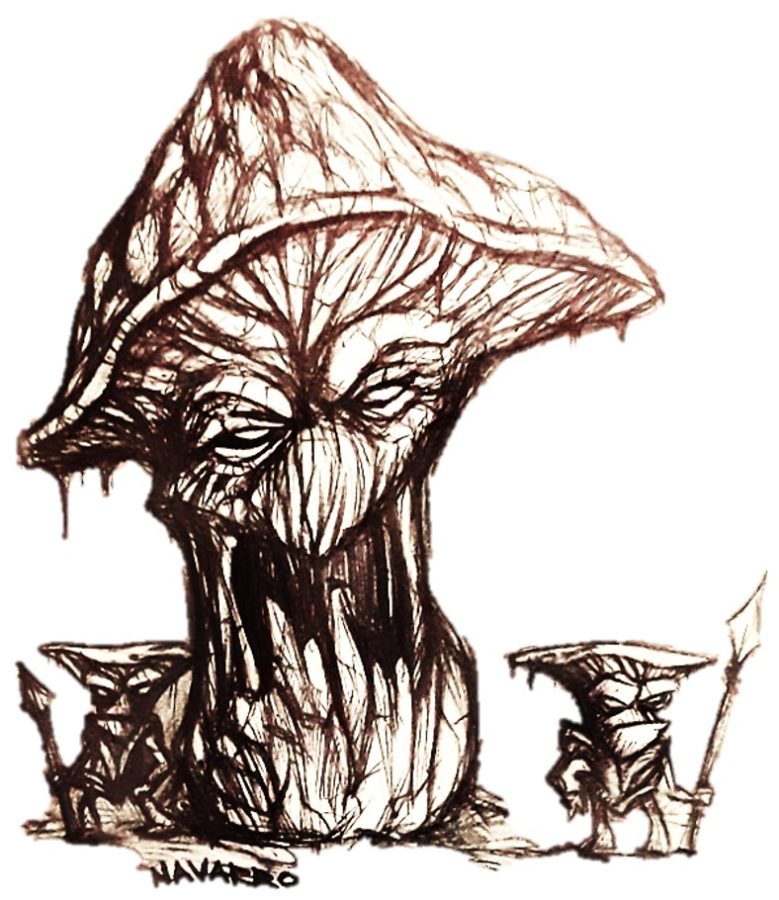 RhyzonidGrim Caps of the Depths

Everyone knows that the gods are responsible for the elevation of all of the humanoid races. They have raised their beloved races from sentience to sapience all at once—but exceptions do exist. When the Myconids were “awakened”, it is said, the gods forgot some of their number. These elder Myconids, the Ancient Ones, were too deep in their melding state to hear the gods’ calls. And so they remain, untouched by eons of time, with only enough awareness to dream. As for the Myconids themselves, they are reluctant to discuss their forebears; though they seem to hold the Ancient Ones in some measure of devoted awe.

Ancient Ones are almost unrecognizably different than their decedents. Individual Ancient Ones are huge, atavistically-hewn version of any number of modern Myconid types. Most are of the “common” caste, giant toadstools that tower in mycelium-clad caverns deep in the Depths. Each lives alone, unlike its tribal relatives, and each blankets a significant proportion of the surrounding rock with a thick layer of especially velvety mycelium. This blanket can extend from the creature’s “central” chamber for hundreds of feet, and near the center may be up to three feet thick. Whether it extends even further through hidden cracks to deeper more secure fungal demesne or as conduits miles from the Ancient One’s main locale has been discussed amongst the sages and scholars of Veldon. This incredible feat of organic growth in the wastes of the Depths is due to the unique connection between Ancient Ones and their offspring, the Rhyzonids.

At any given time, each Ancient One may have one hundred or more children. It treats these mobile, juvenile forms as servants; the young fetch carrion and rot to feed their parent, and it communicates with them in a direct rapport much as Myconids do. Unlike Myconids, these young have very limited intelligence. Without the influence of their parent, they are more like animals than they are like the humanoids that they closely resemble. The influence of the Ancient One does not make a Rhyzonid more clever, but rather improves the coordination between them, much like termites. 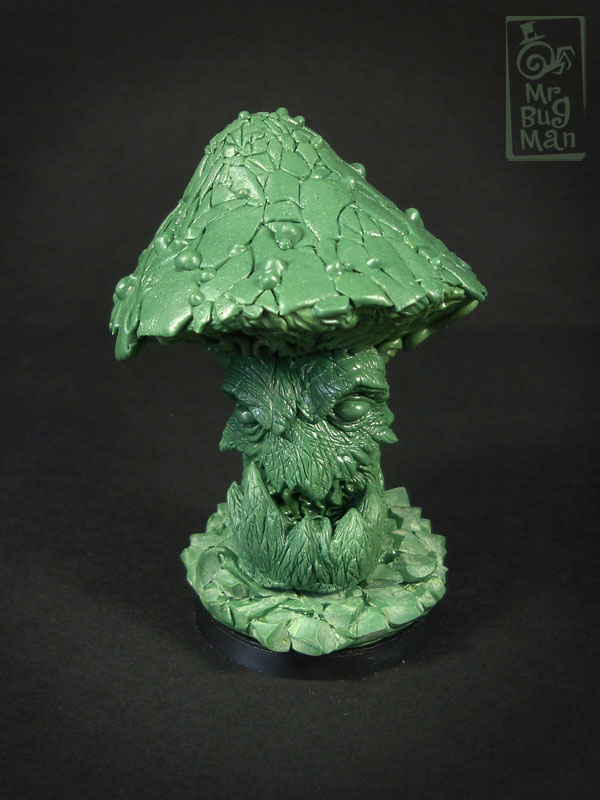 Ancient One coming soon to the Bazaar

Rhyzonid Children are sometimes referred to as Mushroom Faeries, but more often as Grim Caps, because of their small size, invulnerability to many common predators of the Depths, queer behavior and their unique ability to vanish without a trace. Grim Caps can be mistaken for small Myconids though their curmudgeon-like disposition readily sets them apart. When Grim Caps are the first to sense humanoids advancing upon their territory they will immediately hide from view and carefully observe the intruders, passing along information to the Ancient One. If the Ancient One perceives the trespassers as threatening, then the Grim Caps will be directed to distract, confuse, and even attack those that may find the Ancient One’s hidden burrow.

In addition to a horde of Rhyzonids and a pervasive mycelium mat, an Ancient One is perpetually surrounded by a thick miasma of sparkling spores. Unlike Myconid spores, these are so thick as to obscure vision within their demesnes. The Ancient One’s rapport spores pulse and strobe in hypnotic patterns of glowing colors that stretch for dozens of yards beyond its body.  These do not allow for the same telepathic communication that Myconids use to engage outsiders; the Ancient Ones are old and alien beings, and their connection is less conversation than it is a communion of sorts. It can transmit emotional states, smells, and tastes, but otherwise lack the sensorium, or perhaps desire, to communicate effectively with higher humanoids. This strange intelligence also sets them outside the realm of alliance or hostility; Ancient Ones do not seek out a greater understanding of the outside world. They simply exist, and wait for other life to expire so that they might grow larger.

This neutrality is partially borne out in practice by the other spores that the Ancient Ones emit as a part of their cloud, for in addition to the rapport spores they are constantly emitting toxins. Though not immediately dangerous to healthy adults, the infirm are likely to expire after sufficient exposure to the spores. Small animals take but a few minutes of exposure to succumb, while larger creatures such as humanoids usually escape permanent harm unless they remain in the miasma for significantly longer span. The Ancient Ones cannot voluntarily suppress this ability; Rhyzonids and Myconids are immune.

Grim Caps are also more mobile within their parent’s domain. They can transport themselves through the mycelium mat, popping up elsewhere without a sound. Some of the wilder stories suggest that they melt bodily into the mat of fungal flesh; others that they step magically from place to place within the Ancient One’s cavern. Whatever is the case, individual Grim Caps are too difficult to distinguish one from another for anyone to be sure.

Unknown to even those scholars that frequent Myconid circles is that on a rare occasion one Myconid will break away from its circle and travel for days to find the secret home of an Ancient One. Driven by a primal impulse this rogue Myconid might then spend days or weeks in a rapt “melding” with the Ancient One.  At this point the Myconid matures into a Sovereign and immediately departs to start its own circle. The connection between Myconid and Rhyzonid is strong and as old as the Depths themselves. 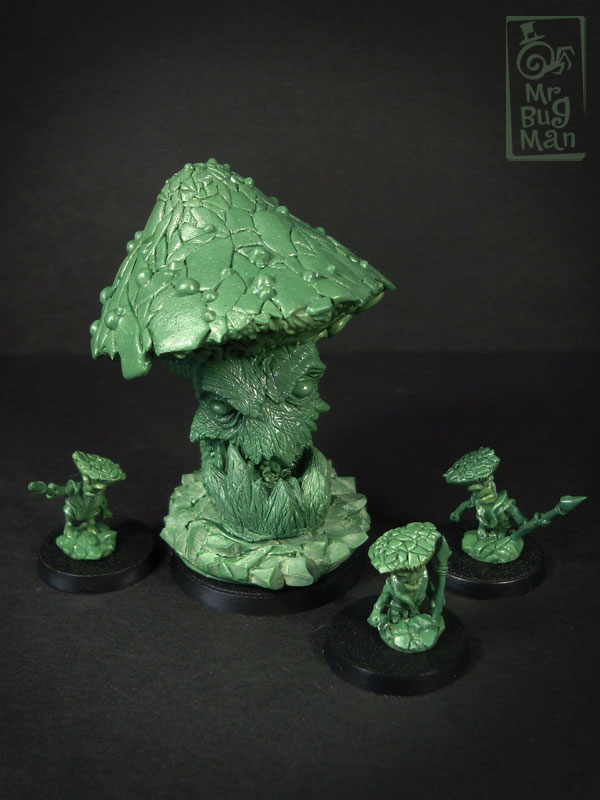 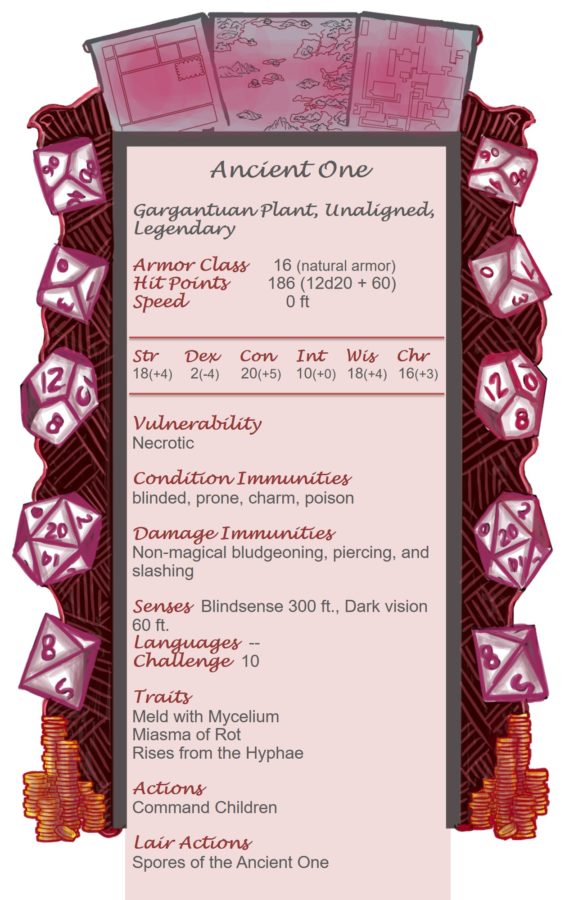 Meld with Mycelium. When in its lair, an Ancient One’s mushroom form, as a bonus action, can be absorbed into its extensive mycelium. While in this state that Ancient One can hide and move undetected (+10 Stealth Check). It may move within its mycelium at a speed of 10 feet. It also regains 20 hit points per turn in this state as long as it has not sustained necrotic damage prior to melding.

Miasma of Rot. This thick cloud of spores is emitted by the Ancient One’s mycelium throughout its entire lair. It provides heavily obscured visibility to all creatures except for the Ancient One and its children. Any creature starting its turn within the cloud must make a DC13 Constitution save or take 5 (2d8) poison damage. Otherwise it receives half damage.

Rises from the Hyphae. Upon reaching 0 hit points the Ancient One’s consciousness disperses throughout its gargantuan mycelium. It will then slowly reforms over the course of months. Only certain powerful necromantic spells can permanently kill an ancient one.

Command Children The Ancient One can direct up to 12 Grim Caps to do its bidding. These will emerge from its mycelium to perform an action. A Grim Cap gain its parent’s +7 attack bonus while in physical contact with the mycelium. A command can persist for more than one turn, but may not change unless redirected using this action.

Hypnotic Spores – Any creature that sees the spores must make a DC16 Wisdom saving throw or stand transfixed by the pattern unable to move. They take the incapacitated condition. They may make a saving throw at the beginning of each of its turns to negate this condition. On a positive save, the creature is unaffected and is immune to this effect for the next 24 hours.

Command Spores – Any creature that inhales this type of spore cloud must make a DC16 Wisdom saving throw or act as if effected by the Command spell. On a positive save, the creature is unaffected and is immune to this effect for the next 24 hours.

Rapport Spores – Any creature that inhales the spores must make a DC16 Wisdom saving throw or become melded with the consciousness of the Ancient One. The Ancient One can only convey simple ideas and emotions. 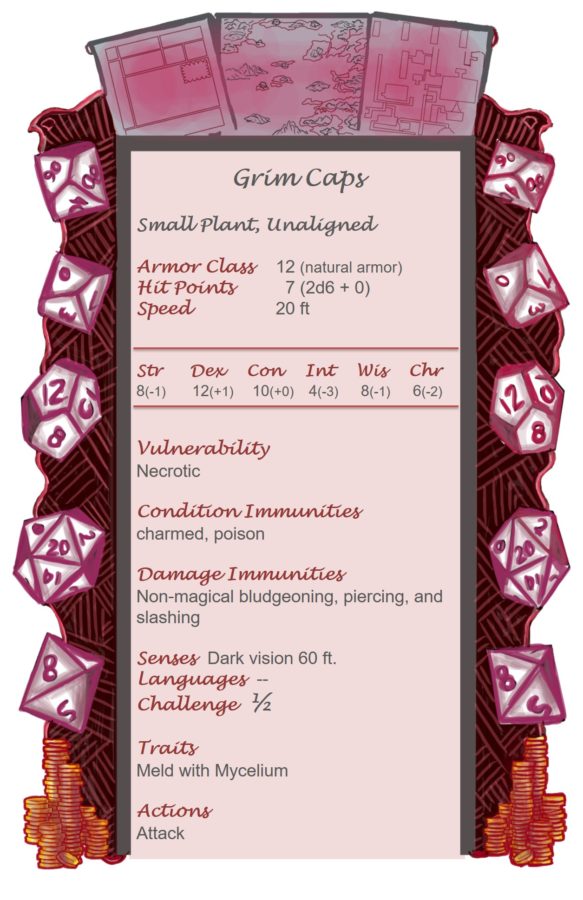 Meld with Mycelium. When in the lair of its parent Ancient One, a Grim Cap, as a bonus action, can be absorbed be the Ancient One’s extensive mycelium. While in this state that Grim Cap can hide and move undetected (+8 Stealth Check). It also regains all of its hit points.