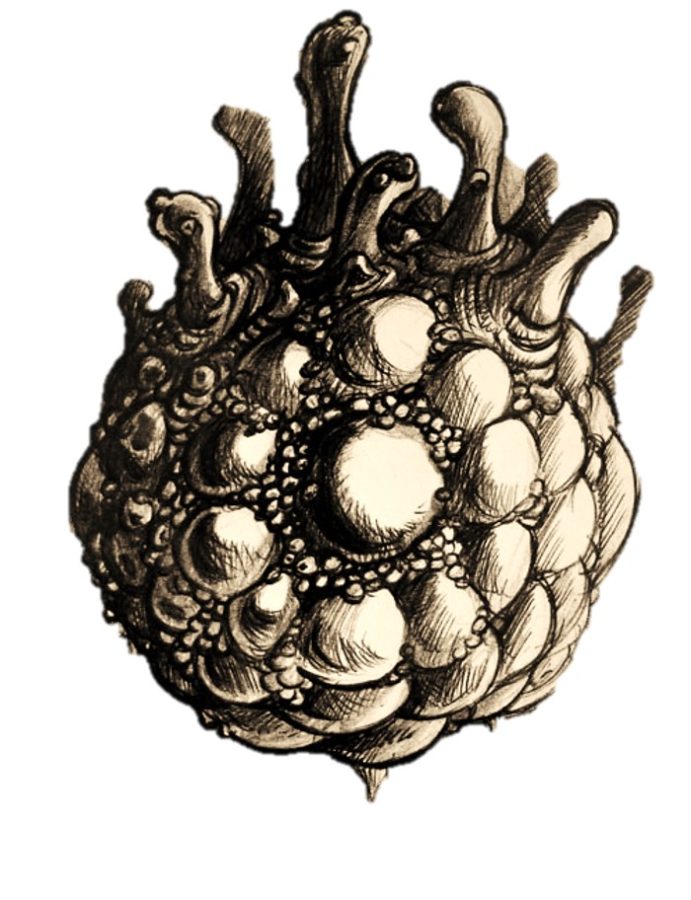 Gas Spores are a curious clade, a stunning natural example of variations on a theme. They come in a dizzying variety, with hundreds of types covering a broad range of sizes, shapes, and unique adaptations. There are Cave Chimes, Glass Bobbins, Floating Flares, Flowers o’ the Depths, Crackle-Orbs, and Spore Tyrants–to name just a few. All are roughly spherical and buoyant, with the ability to ride the subtle air currents that pervade the Depths. Gas Spores float in almost every region of the dark below, hovering in passageways and bobbing along the ceilings of larger caverns. Their unique adaptations have proven to be wildly successful, and they are among the most common fungal creatures of the Depths. Perhaps most intriguing, no scholarly society has yet discovered why they’re so prolific; it’s not entirely clear what they eat, or even if they eat at all.

Smaller varieties often develop in clusters, sometimes tethered to cave walls or suspended by web-like strands. A few varieties float on long, vitreous stalks like knots of seaweed. Collectively called “cave chimes” for their gentle tinkling music, these glassy-skinned spheres are commonly mistaken for clutches of giant spider eggs. Cave Chimes are often full of flammable gas, rather than the noxious spores or caustic fluids common to the larger free-floating types. This makes clusters very dangerous to disturb; the fiery burst of one shattered spore globe may easily throw out shrapnel capable of shattering others, creating a chain reaction that can scour a tunnel of other life. Tunnels laden with Cave Chimes form havens for soft-bodied worms and other herbivorous life-forms that are otherwise ill-equipped to defend themselves from predators. 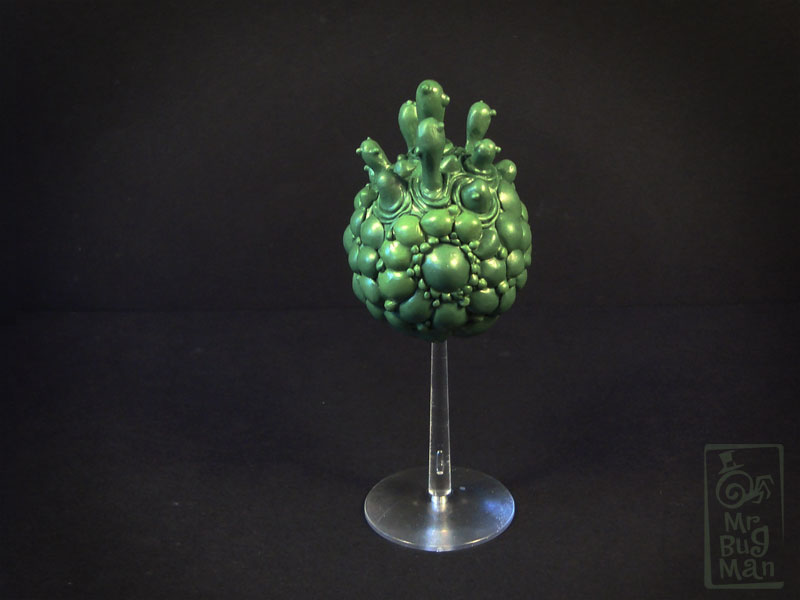 Larger types of Gas Spore usually appear alone, and demonstrate the mimicry for which the clade is most noted. Up to a full arm-span in diameter, the outer envelopes of these floating fungi are made of a collage of bulbous polyps that are both brittle and mostly hollow. The Glass Bobbins and Crackle Orbs have shockingly accurate eye spots that evoke the near-mythical Eye Tyrants of the furthest Depths, complete with pupils that seem to follow passersby. Floating Flares and Flowers o’ the Depths have fungal stalks sprouting from their crowns, with eye spots on their tips that wave against the breeze. The menace called the Devil’s Eye has developed both a pseudo-eye spot and eye stalk-like growths, and even has a false mouth lined with root-like teeth. Though almost all display the same explosive defense mechanism for which Gas Spores are generally known, the detonations themselves have a huge variety of effects. The materials released in these bursts are highly sought after by many an alchemist’s apprentice. 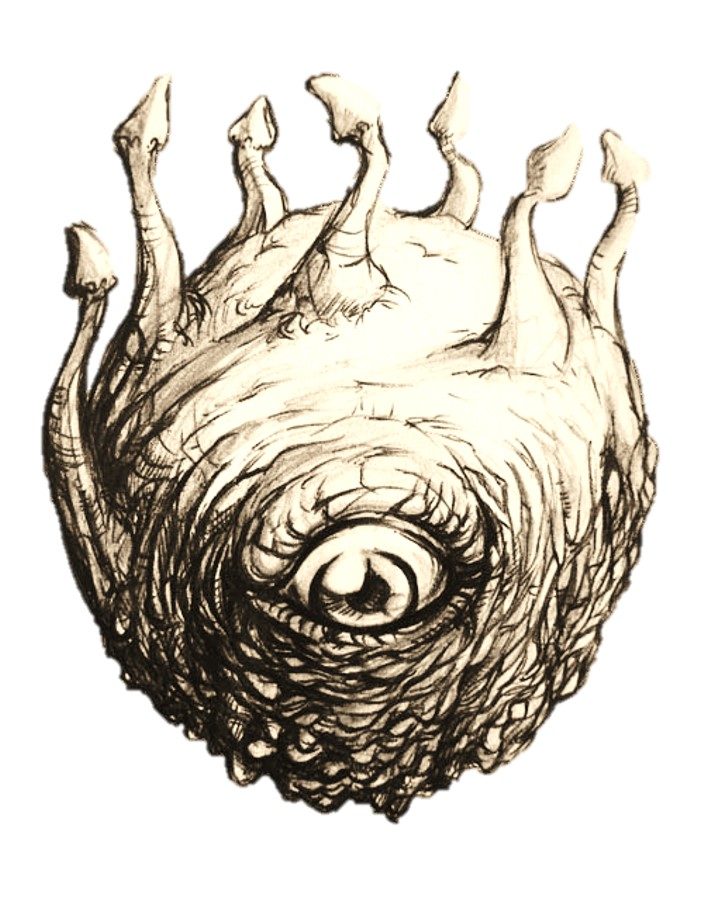 Gas Spores, no matter the type, exhibit no intelligent behavior and do not interact with humanoid species. In fact, they rarely interact with the environment at all. The adults don’t appear to take nourishment from organic material, or require water. Some persist in arid blast chimneys for years, tinkling gently in the subterranean air. For all that they’re oblivious to their surroundings, though, there are many who believe that these floating fungi act under the guidance of a greater intelligence. There are many stories of Gas Spores appearing at the most unlikely times, detonating to rescue those that can’t save themselves. These tales aren’t rare; many is the good-hearted dwarven cleric whose morningstar has sent a Gas Spore careening amidst stalactites without harm, or the unwary and innocent gnome that has fallen upon a cluster and bounced off harmlessly. Just as many are the stories of Gas Spores detonating to alert peaceful villages of coming raiders, or slaver bands laid low by the timely detonation of a single Floating Flare.

Despite these stories, gas spores of various types have at times been harnessed by various races as weapons. Punted gently through the caverns with pads or bladders at the end of long poles, just a few Gas Spores can make for a brutally effective ambush–especially if, like the Dark Elves, one cares little for those killed by the Spores that explode unexpectedly along the way. The dark elves in particular are infamous for their suicide slave squads. Sometimes called “party platoons” by those with darker senses of humor, these bands of cannon fodder are assigned to find and collect Gas Spores for Dark Elves war parties. Each band, despite quick turnover, has its own body of oral lore about the Spores; what they really eat, songs to soothe them, salves to spread on the punting sticks to prevent premature explosions. Most die gruesome deaths.

The effects of Gas Spore blasts are extensively–if haphazardly–catalogued. The most common types are known to many, the subject of children’s rhymes and cave-craft lore. Crackle Orbs release a unique alchemical mixture that rapidly absorbs all nearby heat, capable of freezing troublesome vermin and exposed arms alike. Their spores are deeply packed onto the exteriors of their nutrient-rich rinds. Flowers o’ the Depths pop in a spray of fast-setting glue, affixing small creatures to the stone to nourish a fresh layer of spores. Glass Bobbins explode in a whirl, throwing off needle-like shards of their spore-covered crusts deep into the soft flesh of nearby critters. Floating Flares are sometimes mistaken for a rogue fireball spell, as their bodies disintegrate nigh-instantly into spheres of searing flame and heat-activated spores. Other varieties rocket randomly around their caverns like a balloon, leaving contrails of caustic gas to spread their spores far and wide.

Most of those who make it their business to know every niche and crevasse of the Depths will have at some point seen a truly huge specimen. These primordial Gas Spores, though, are the strangest and most deadly. So-called “Spore Tyrants” exhibit some truly incredible traits. Many stories circulate amongst travelers and traders of Spore Tyrants that channel magical abilities through their eye spots like true Eye Tyrants. The Derro believe that these ancient gas spores were created by the Eye Tyrants themselves before the beginning of recorded history in an attempt to create life in their own image. Other races claim that they were made by the mad fever-dreams of those same beings, when they were twisted by Dreamwalkers—or even by Ascogenea herself. Eye Tyrant sightings are omens of doom; they’re actively hunted by Deep Gnome and Shield Dwarf rangers. 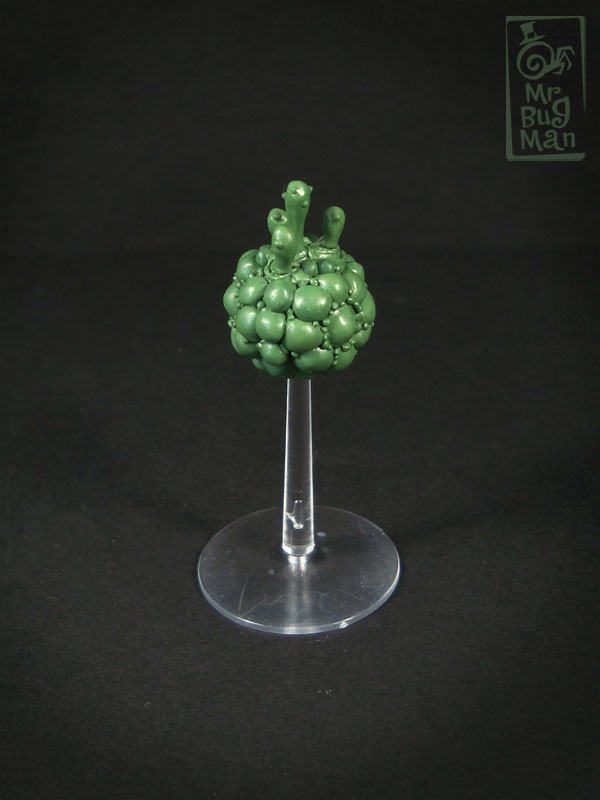 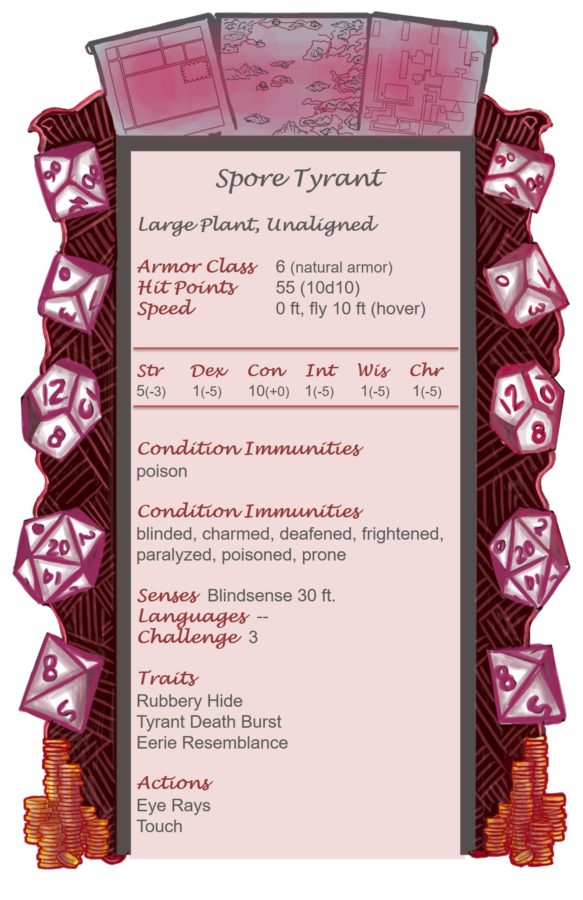 Rubbery Hide. If damage reduces the Spore Tyrant to 0 Hit Points, it must make a Constitution saving throw with a DC of 5 + the damage taken, unless the damage is piercing or from a critical hit. On a success, the Spore Tyrant drops to 1 hit point instead.

Tyrant Death Burst. The Spore Tyrant explodes when it drops to 0 hit points. Each creature within 30 feet of it must succeed on a DC 15 Dexterity saving throw or take 54 (12d6+12) force damage and knocked Prone, or half as much on a save. They must also make a second DC 15 Constitution save of become infected with Raging Tyrant disease on a failed save. Creatures immune to the poisoned condition are immune to this disease.

Spores invade an infected creature’s system, killing the creature in a number of hours equal to 1d12 + the creature’s Constitution score, unless the disease is removed. In half that time, the creature goes beserk and attacks all living creatures within sight for the rest of the duration. After the creature dies, it sprouts 2d4 tiny Gas Spores or a random, non-Tyrant type, that grow to full size in 7 days.

Eerie Resemblance. The Spore Tyrant resembles an Eye Tyrant very closely. A creature that can see the gas spore can discern its true nature with a successful DC 18 Intelligence (Nature) check.

Touch. Melee Weapon Attack: +0 to hit, reach 5 ft., one creature. Hit: 7 (2d6) poison damage, and the creature must succeed on a DC 10 Constitution saving throw or become infected with the disease described in the Raging Tyrant trait. 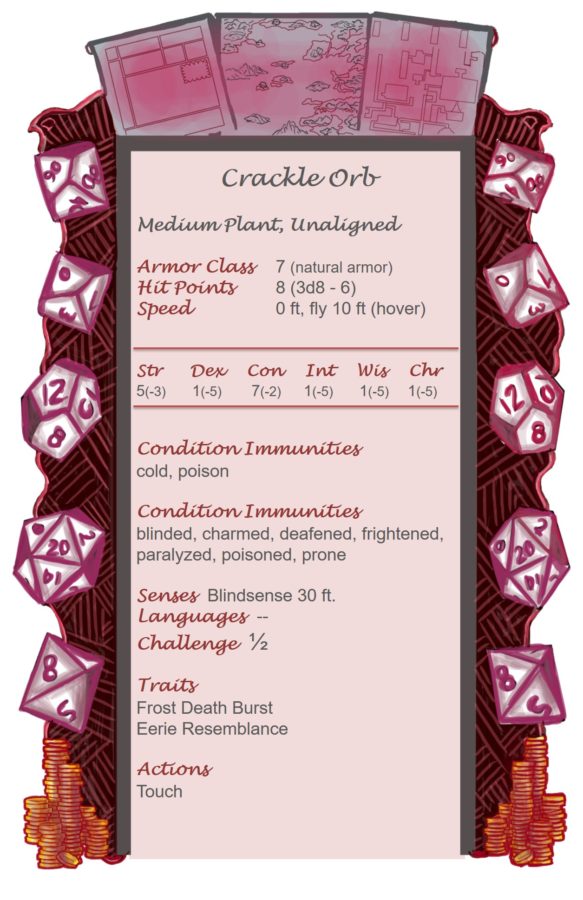 Frost Death Burst. The Crackle Orb explodes when it drops to 0 hit points or if it sacrifices itself. Each creature within 10 feet of it must succeed on a DC 15 Constitution saving throw or take 21 (6d6) cold damage and become infected with Creeping Frost disease on a failed save. Creatures immune to the poisoned condition are immune to this disease.

Frigid spores invade an infected creature’s system, killing the creature in a number of days equal to 1d4 + the creature’s Constitution modifier, unless the disease is removed. In half that time, the creature becomes paralyzed for the rest of the duration. After the creature dies, it sprouts 2d4 tiny Crackle Orbs that grow to full size in 3 days.

Eerie Resemblance. The Crackle Orb resembles an Eye Tyrant. A creature that can see the Crackle Orb can discern its true nature with a successful DC 12 Intelligence (Nature) check.

Touch. Melee Weapon Attack: +0 to hit, reach 5 ft., one creature. Hit: 1 cold damage, and the creature must succeed on a DC 10 Constitution saving throw or become infected with the Creeping Frost disease described in the Frost Death Burst trait. 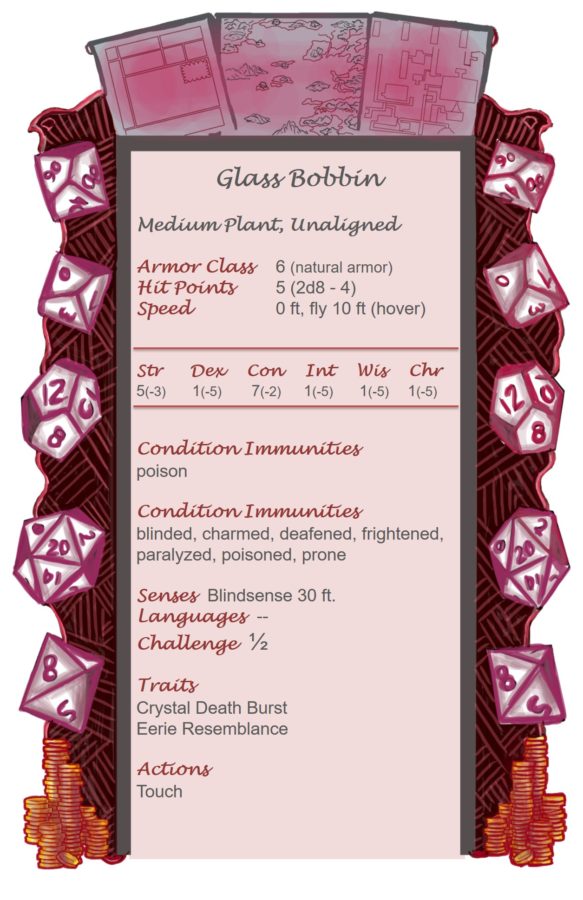 Crystal Death Burst. The Glass Bobbin explodes when it drops to 0 hit points or if it sacrifices itself. Each creature within 10 feet of it must succeed on a DC 15 Dexterity saving throw or take 21 (6d6) piercing damage and are subject to the Wounding Effect. Creatures immune to the poisoned condition are immune to this effect, as are constructs and undead.

Crystalline, barbed, spore-laden needles tear at an infected creature’s flesh, and the wound is preternaturally severe–the creature loses 1 hit point per minute, and its maximum hit points are reduced by the same amount. These wounds can be healed by magic, but reduced maximum hit points can only be restored by Remove Curse, Greater Restoration, or a similar effect. After the creature dies, it sprouts 2d4 tiny Glass Bobbins that grow to full size in 7 days.

Eerie Resemblance. The Glass Bobbin slightly resembles an Eye Tyrant. A creature that can see the Glass Bobbin can discern its true nature with a successful DC 10 Intelligence (Nature) check.

Touch. Melee Weapon Attack: +0 to hit, reach 5 ft., one creature. Hit: 1 piercing damage, and the creature must succeed on a DC 10 Constitution saving throw or become infected with the Wounding Effect disease described in the Frost Death Burst trait.