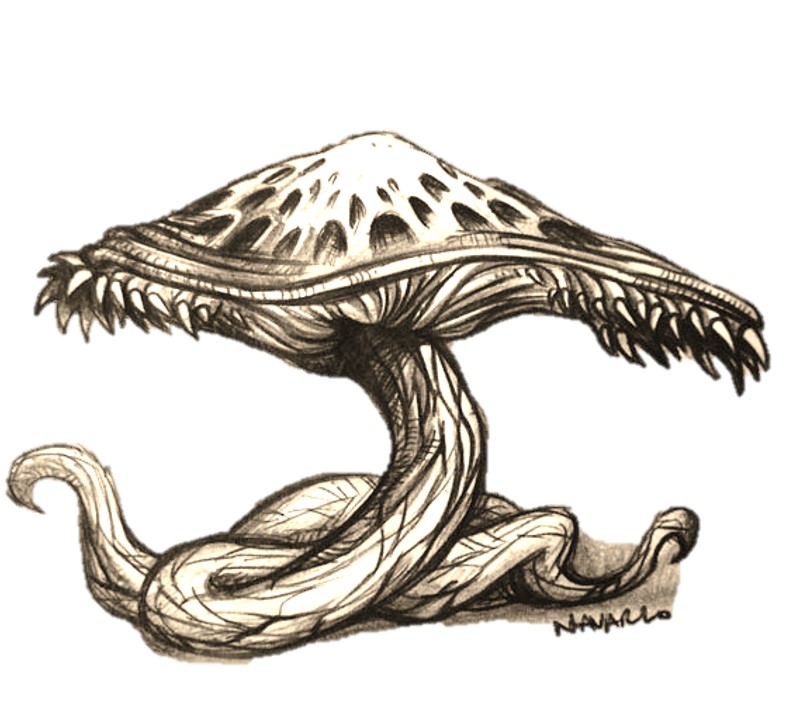 It is not only the surface world that has huge predators lying in wait for the unwary. The Carnivorous Mushroom is the crocodile of the Depths. These huge, ambulatory fungi are among the most dangerous ambush predators of the caverns. Full-grown specimens can approach the size of a small cottage, and prey on animals as large as draft horses. These elder individuals have been known to slaughter even something as tough as a Stone Giant warrior. Most moderately-sized communities in the Depths treat patrolling for Carnivorous Mushrooms as a priority, lest their predation cut off travel to other places.

Crocs-o’-the-Deep, as they are also known, may be found anywhere that other fungi provide a screen for their presence. These predators shun groups of humanoids, and will only reveal themselves when an individual creature of significant size wanders near. Unlike most other conscious fungi, they appear to have territories of a sort; a given individual may range over miles of tunnels and caverns, making a complex circuit that it nevertheless repeats perfectly over the course of decades. 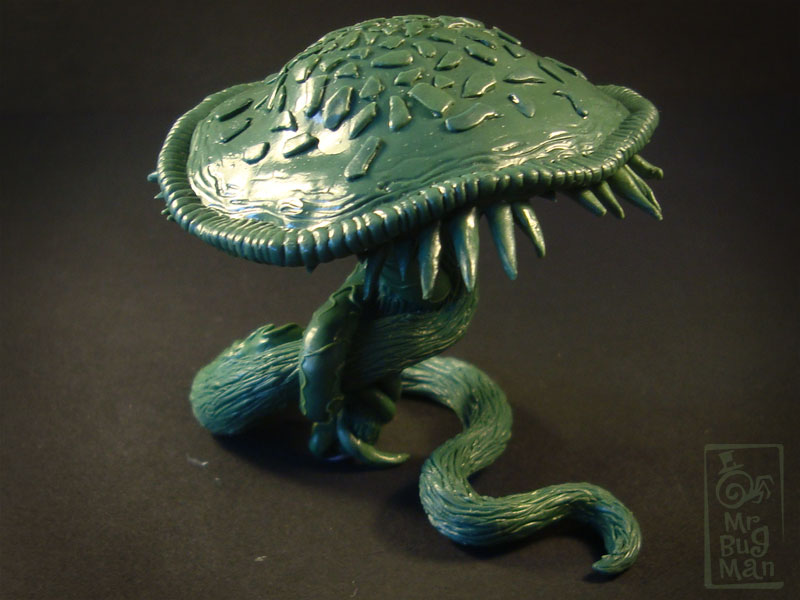 Though Crocs-o’-the-Deep lack the poisons, acids, and exotic spores of other fungoid predators, they make up for it in sheer ferocity. On the attack, Carnivorous Mushrooms can make incredible leaps with their powerful “stalks”—actually more akin to incredibly dense muscle. Saber-like spines rim their caps and are a unique, tightly-compressed form of bark; continuously shed and regrown over the course of their long lives. These spines are kept retracted in unique grooved structures not unlike the gills of other mushrooms. At rest, the Crocs-o’-the-Deep resemble nothing so much as a typical giant toadstool with a thousand hidden snake fangs.

Carnivorous Mushroom hunting is also aided by a curious micro-ecology of parasites and molds that live under their caps and between their gills. These parasites help to break down the mushrooms’ prey into useable nutrients, and some are known to spread diseases that allow the Croc-o’-the-Deep to catch up to wounded prey as sepsis sets in. This is a relatively significant advantage, as the Carnivorous Mushroom is a creature of feast or famine; the energy expended in their first, fierce fight can be the difference between life and death in the barren Depths. If prey escapes after the initial pounce, these patient predators may follow a blood trail for days at a snail’s pace, conserving their energy in the hopes that they will find their prey again before their reserves are spent.

While living Carnivorous Mushrooms are a constant menace to travel and trade, their corpses can be valuable indeed. Aside from the eternal value of organic matter itself underground, their uniquely tough yet flexible frames are very slow to decompose. Their deliquescence leaves behind a light but strong “skeleton” that evokes the cast skin of a snake. With its myriad “teeth” intact, the skeleton may be put to a number of purposes–most notably, trapping. Derro are especially known for their use of Carnivorous Mushroom remains in pit traps, where the springy maw at the bottom uses the victim’s own weight to spring shut and keep them trapped. The teeth are also used on occasion for arrowheads or tool tips; their bark is too soft to keep an edge like metal, but naturally maintains a wicked point. 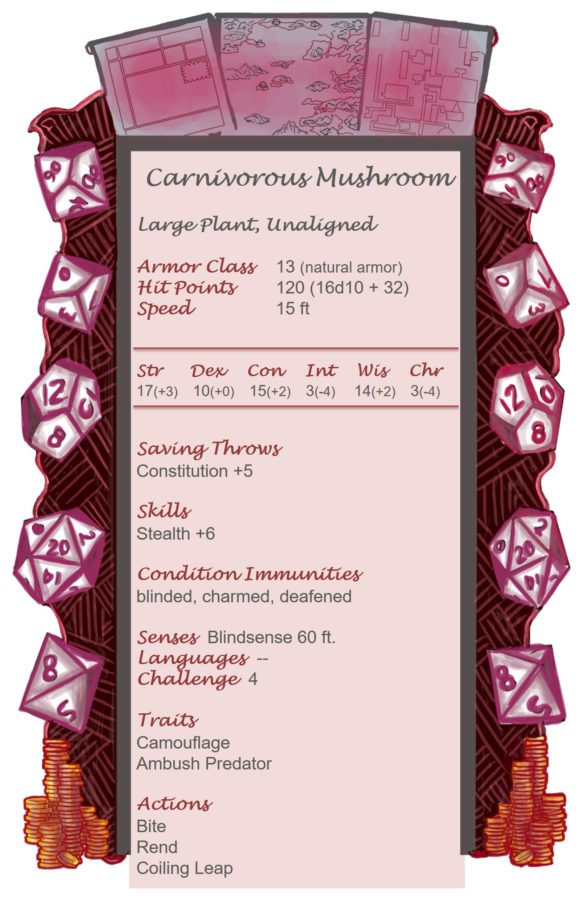 Camouflage. The Carnivorous Mushroom gains advantage on Dexterity (Stealth) checks as long as it’s adjacent to other fungi.

Ambush Predator. The Carnivorous Mushroom has advantage on attack rolls against any creature that hasn’t taken a turn in combat yet. In addition, any hit it scores against a surprised creature is a critical hit.

Bite. Melee Weapon Attack: +6 to hit, reach 10 ft., one creature. Hit: 17 (4d8+3) piercing damage, and the creature is Grappled (Escape DC 13). The Carnivorous Mushroom has advantage on Bite attack rolls against creatures that it is grappling. At DM discretion, this attack may spread disease (see DMG).

Rend (Recharge 5-6). The Carnivorous Mushroom grinds its myriad teeth and thrashes violently, dealing massive damage to a grappled creature. The creature must make a DC 13 Strength saving throw, taking 8d10 piercing damage on a failure, or half as much on a successful one.

Coiling Leap (1/Day). The Carnivorous Mushroom can make a single mighty leap, moving up to sixty feet horizontally or thirty feet straight up. At the end of this leap, it can make a single bite attack against an adjacent enemy.