Like common toadstools, Ascomoids start their life cycle innocuously. Their saprophytes are long, leathery stalks with sharp, root-like feet; in this form they are sometimes harvested for fiber to make ropes. They grow from animal and humanoid corpses, oft found in the center of a passage or cave where they came to rest. These newborns form the center of fungal “gardens”, as the decomposing corpse nourishes a variety of more common fungi. As in the ocean depths, there are species found in these underground gardens that exist nowhere else. Certain mutualistic animal creatures, too, inhabit these gardens; arthropods, particularly giant species, are very well represented.

When the nascent Ascomoids reach a sufficient height—usually three to four times the height of a Derro—they develop a large, heavy fruiting body. These bodies shift restlessly upon their stalks, and emit a constant ticking noise. Fruiting Ascomoids slowly expand their gardens as they bludgeon passing creatures to death for nutriment; these are often cave creatures attracted by their ticking, but sometimes include humanoids as well. 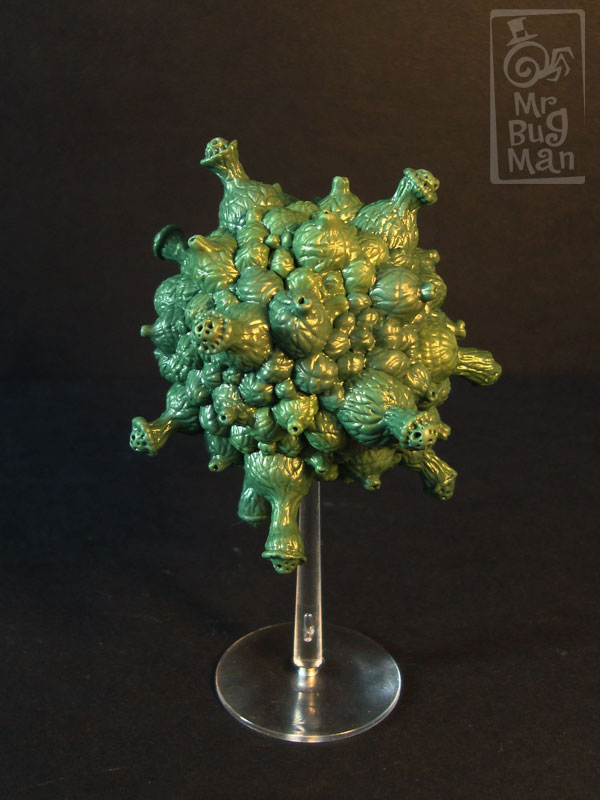 When the spherical fruiting bodies reach their full growth, which may be as large as an adult humanoid in diameter,  the fibrous stalks coil tightly and then launch the fruiting bodies into other caverns. There they roll and bounce like wrecking balls, seeking warm-bodied prey. These Mature Ascomoids retain the developed senses of their earlier sessile form, and can detect living creatures with exquisite sensitivity — these senses are foiled only by magical silence, which severely disorients the fungi. Dissected Ascomoids exhibit a strange internal physiology that includes numerous fluid-filled sacs. These are thought to be pumped in circulation by specialized hyphae, and keep the body moving.  As they roll like huge tumbleweeds through the Depths, covering vertical and horizontal surfaces with equal ease, they strike animal prey. Without stopping, their craggy  outer surfaces partially engulf the creatures as they do rocks and debris, and they roll on. The violent bludgeoning that the prey receives upon the cave walls serves to kill it, so that the Ascomoid can begin its digestion.

Corpses aren’t fully ingested; the organism just digests whatever portion has been engulfed and the rest drops away. These partially-digested corpses start the life cycle again. Each is pierced with a few shoot-like saprophytes—new Ascomoids, of which only the strongest survives. Mid-sized specimens are known for rolling through traveling parties in a blink, absorbing those in their path and rolling away. Those that keep their feet may be tagged with thorny, leech-like saprophytes that tear the flesh as they’re removed.

Aside from their steady ticking, the means by which normal Ascomoids actually sense other creatures is unclear. Dissection has never revealed an identifiable sensory structure amidst the hyphae. On the other hand, the aim of the fruiting bodies as they roll and bounce is nothing short of uncanny; they rarely score a glancing blow, and seem to roll toward living creatures more often than chance would have them do. They are never seen to circle back to attack creatures that they have missed in a group, however, preferring to take what they can get and roll on.

Legends tell of huge specimens in the furthest deeps that continue to roll for decades, gathering and shedding corpses with piercing tendrils, devouring whole groups of travelers and leaving broad paths of fungus and flesh as they seek truly titanic prey. They are said to be the foul progeny of the daemon Queen of Fungus, Ascogenea herself—grown fat on her sporous milk. Stories tell of huge, rolling juggernauts changing direction on a silver piece, shifting their enormous bulk in an instant with gouts of fire and roaring thunder from their many alien mouths. Some rumors even persist of groups of these great monsters hurtling through the darkness, crushing all in their path.

The few verifiable accounts of these so-called “Fellrot” Ascomoids describe cart-sized specimens, rolling as fast as a man can run. These rare variants display a foul cunning, seeming to unerringly target the physically weakest members of a group—and picking out mages with uncanny accuracy. The Fellrots also appear to exhibit true malice; they may circle around multiple times, snatching up the members of a party one by one and letting the others panic for hours before returning for their next victim. No Fellrot has ever been captured, for it can violently billow forth a thick, spore-laden gas, evading even the most determined hunters.

Juggernaut. As long as the Fellrot Ascomoid moves half its speed or more on its turn, it has advantage on saving throws against effects that would reduce its movement speed.

Roll-by Attack. As long as it has moved at least half of its speed on its turn, the Fellrot Ascomoid does not provoke attacks of opportunity when it moves.

Spider Climb. The Ascomoid can climb difficult surfaces, including upside down on a ceiling, without needing to make an ability check.

Wrecking Ball. Melee Weapon Attack: +7 to hit, reach 5 ft., one creature. Hit: 9 (2d8) bludgeoning damage and 9 (2d8) acid damage. If a creature of Medium size or smaller is damaged by Wrecking Ball, it must make a DC 14 Strength saving throw or be knocked prone.

Bellows of Ascogenea. Recharge 5-6. The Fellrot Ascomoid may forcefully blow out a 30 foot radius cloud of poisonous spores through hundreds of porous sacs. It often does this to hinder pursuit or make an escape when its movement is stopped. When it does so, each creature who starts their turn within this cloud must make a DC 15 Constitution saving throw. On a failed save, creatures take 18 (4d8) poison damage, cannot breathe, and is blinded. Those that succeed take half damage, and are not subject to blindness or suffocation. The cloud heavily obscures sight. 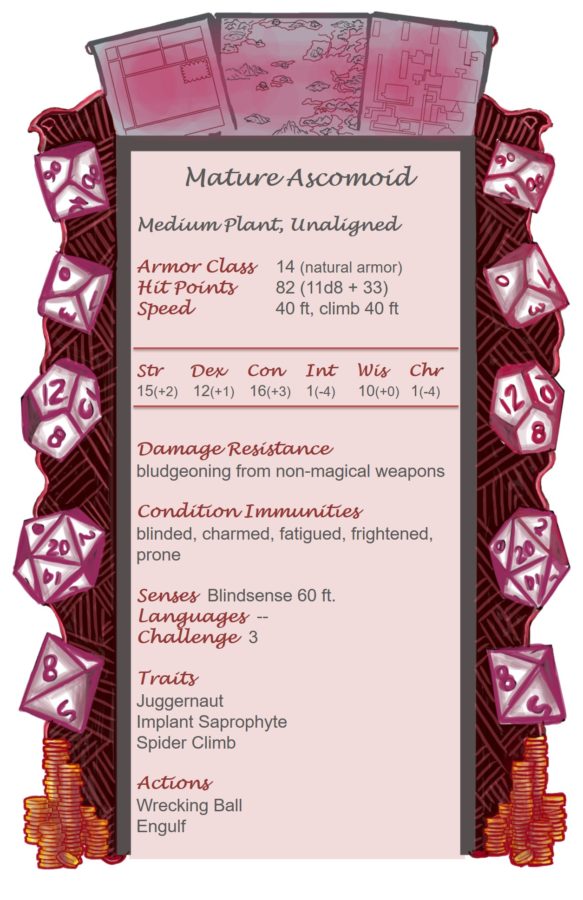 Juggernaut. As long as the Mature Ascomoid moves half its speed or more on its turn, it has advantage on saving throws against effects that would reduce its movement speed.

Spider Climb. The Ascomoid can climb difficult surfaces, including upside down on a ceiling, without needing to make an ability check. 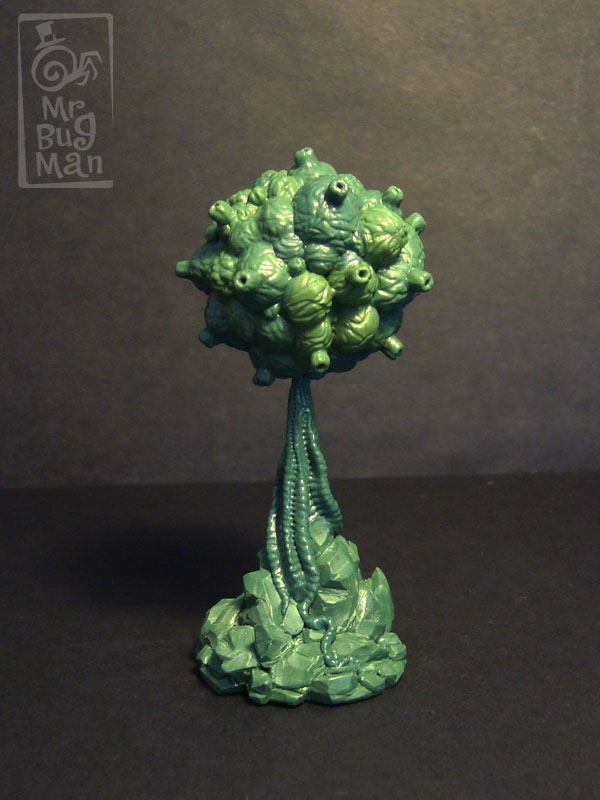