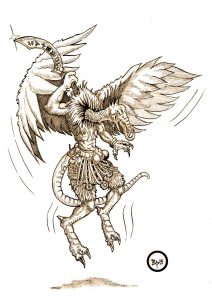 Known and feared on dozens- perhaps hundreds- of worlds, the Vreek’k is the most common of the true demons and one of the easiest to summon. The vulture-headed fiends relish destruction and slaughter, cleaving limb from torso in revels of bloody butchery. Those who summon them are mad, truly evil, or unbalanced with hubris- sometimes all three. No true demon can be controlled for long, and woe comes always to those who try. Vreek’ks, especially, are known for their tendency to mysteriously grow in number even when their summoner has been slain. Groups of Vreek’ks can create strange and horrific ritual effects, most commonly vast plagues or targeted earthquakes that level the dwellings of their victims.

Sometimes known as butcher demons, each of these creatures carries an ancient and vicious-looking bronze blade with which they take pride in creating the ‘art of dismemberment’. A Vreek’k left long enough to its own devices will settle in a dank cave close to sources of humanoid victims, whom they gleefully abduct and cut to pieces. They create in their lairs an abattoir of sorts, where they consume putrescent flesh and use foul rituals to summon others of their kind in permanence to worlds that they infest. Their power is not limited to butchery; the demons carry virulent poison on their honed claws and advanced specimens can even exhale swarms of blood-seeking screwworms. 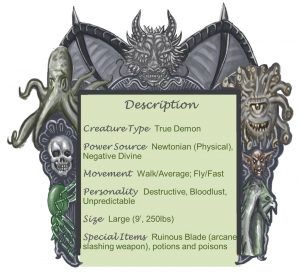 A Vreek’k stands about nine feet tall when upright, though its posture is normally not quite erect and its head juts forward like a beast’s. These demons switch easily from walking on two legs to four and back again, and are strong and agile foes in the air. Each has a body that is strikingly humanoid in frame, if frighteningly twisted. They are gaunt-bodied and invariable dirty and malodorous, feathers caked in grime and old gore. On belts at their waists the fiends carry flasks of poison and potions. They have little else but mail loincloths and their infamous bronze blades. These weapons are keener than bronze has any right to be, and seem to strike harder against the products of mortal hands – armor and object alike. Though khopesh are common, as befits their nature many carry other types of slashing weapons, including kilij, axes, or even falcata.

As a consequence of their interconnection and inherent ability, a Vreek’k is rarely found alone. They are also creatures rarely found with other fiends, as they have a strong tendency to bring a mayhem to all living things beyond themselves – they fall upon all else that breathes like hungry wolves or mad vultures. Their lairs are often filled with creatures of rot and ruin, otyughs and rot grubs the most ubiquitous among them. None has ever been seen to engage in intrigues like other more powerful and calculating fiends. Vreek’ks do not employ mortal agents or catspaws- they only destroy. The immediate vicinity of Vreek’k infestation is characterized by mutilated animal carcasses, trees torn by claw sharpening (often confused with a presence of cougars or other feline predator), and in advanced cases often plant blights or earth tremors. New infestations of parasites are common as well, particularly the dreaded wound-seeking screwworm. 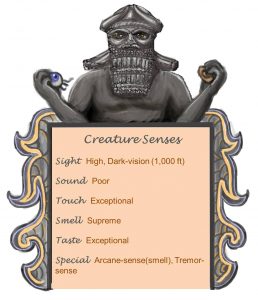 The Vreek’k have claimed Eearnoth as their homeworld. It is a planet of huge geological upheavals and virulent vermin. There are more species of true bug and parasitoid thereon than other species put together, including the only known species of hyperparasitoid. Eearnoth is warmed by noxious vapors but nevertheless a dim world, far from its blaze-red sun. Vreek’ks and other organisms that call the world home are often easily repulsed by strong light sources, and a few even generate their own high-frequency light pulses as defense mechanisms. Endemic plant life is inky blue-black, absorbing every available wavelength of light, and usually splotched with the dusty greys and yellows of blight. The most common “tree” analogue is a species of fast-growing grass similar to bamboo, which the demons frequently use to contain potions and scrolls.

To hunt a Vreek’k is to court death; most quickly find that the hunters have become the hunted.  A butcher demon’s hide is tough and layered in tiny metal-hard scales. Their feathers are strong and flexible like boiled leather and coated in viscous oil, able to deflect even the keenest edges. Their olfactory capacities are legendary, and they have for knack of sensing even magically hidden creatures.  A Vreek’k’s preferred tactics are stealth and assignation, killing quickly and carrying the corpses back to its well-hidden Cliffside lair. If forced or goaded into combat, these demons use flight to attack from all angles with their Ruinous Blade, showing a very high level of proficiency. Despite their talent for tracking, however, Vreek’k display a poor grasp of battlefield tactics; driven by bloodlust and a desire to inflict pain rather than an inclination to martial efficiency, their attacks are uncoordinated and scattered, often targeting a different opponent with every swing. This tendency is offset by their jerky, disorienting style of movement and the cripplingly painful parasites and poisons that they bring to bear. When not flying or unarmed, they will wrap their wings around a single victim, limiting their motion and distracting others, as they slash repeatedly with their venom-covered talons.

Perhaps more fearful than a Vreek’k’s combat prowess are the abyssal strains of parasitic insects that all bear with them. These seem to move endlessly over the demon’s body, in and out of its mouth and over its tongues even as it speaks.  They will jump on victims who come into physical contact with a Vreek’k, or simply get too close. The most well-known is their famous screwworm breath weapon, which releases a cloud of insects that seek wounds in mortal and immortal flesh alike to burrow in and lay their foul eggs. Another, the clutchworm, causes agonizing Heart Bleed disease, wrapping its oozelike body around a humanoid heart and slowly draining blood and feeding on muscle. Within a week, such victims become enraged by the pain and think of nothing but suicide and destruction. They are often known to drink the blood of other mortals, leaving survivors infected with the clutchworm to begin the cycle again. It is best to never encounter such a fearsome outsider. 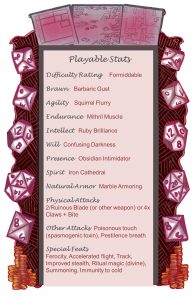 Conjurers find these demons easy to call and control, at least at first. Rotting meat of any type is sufficient offering for most, though in extended service they quickly become ravenous and seek fresh flesh to hang on their filthy hooks. Vreek’ks are unusually consistent in completing bargains with summoners, but proportionally notorious for escaping their bonds when their terms are completed and remaining on the new world indefinitely. Though the mechanism by which they communicate is unknown, summoned vreek’ks always recognize a summoner that has called another of their kind, and reserve special ire for those that have slain their brethren.

In addition to the severity of their distaste for sunlight, Vreek’ks possess a fear of fire stronger than that of almost any other demon. The extent of this pyrophobia is such that a wise summoner can gain an advantage in negotiation by merely having a wand of fireballs or some similar tool to hand- the demons recognize them almost without fail. If kept where their hunger will not overpower them, Vreek’k make expert constructors of undead, especially those with flesh such as zombies and ghasts. In Veldos, a few are employed by particularly careful dwarf necromancer-clerics as body processors and necrosurgeons, who consume the occasional organ (or dwarf) in exchange for their services as assassins and artisans of undeath. Those engaging in such pursuits may be wise to wire their servants’ mouths shut- Vreek’ks consider embalming fluid a delicacy, and preserved flesh even more so.