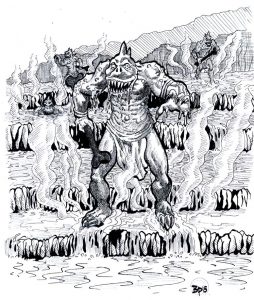 Slaazrou are the vicious brood of Manitak, a huge Demon Lord that roams space. When Manitak’s golden comet appears in the night sky, worlds are razed. Its spawn are mobbing demons that devour every living creature that they can tear apart and fit into their slavering maws. When their parent impacts planets, it casts off hundreds- or even thousands- of Slaazrou, like the seeds from a milkweed pod, to begin consuming everything that its fall has not destroyed. On planets without advanced technology this horde of Slaazrou is cataclysmic, and has wiped all life from the face of worlds. When not in a feeding frenzy, Slaazrou are often encountered in slime-laden pools on alien planets standing still, blank-eyed, waiting for potential victims to come within the range of their senses.

Those foolish enough to summon Slaazrou find that they invariably have more on their hands than they bargained for. Calling just one is next to impossible; a glimpse through a portal into the places from which they come reveals the tangled limbs and bloody slime of dozens or hundreds of Slaazrou intertwined and waiting to feed. The first goes through and half a dozen others hold the portal, so that even experienced conjurers may end with ten when they were calling for one. Even as demons go, Slaazrou are fairly slow of wit, and unlikely to be willing (or even perhaps able) to communicate with a wizard, let alone bargain. 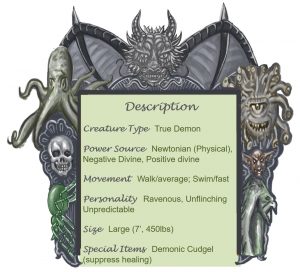 Mortal conjurers are likely to find success by drawing their diagrams in oil or wax near hot springs or pools, where the heat and movement will draw Slaazrou from their comatose state most efficaciously. Like many demons they are fairly easy to summon otherwise, favoring meat of no particular type as offering. They have little inclination to gold, or innocence, or any other trapping beloved by their more sophisticated kindred; they are nearly certain to come through a portal with no prompting at all just to find things with which to fill their ever-empty gullets.

Slaazrou have some anatomical similarities to amphibians found on mortal worlds, and are often mistakenly identified as “Frog Demons”. These are mere coincidences. Their heads are large and warty, sporting two closely spaced bulbous eyes and a broad, gaping mouth. Slaazrou have multiple pupils and multiple lenses in each eye, granting the fiends exceptional visual acuity – beyond, in fact, that of an owl’s. They are known to be sensitive to color, and some specimens even respond to infrared stimuli. 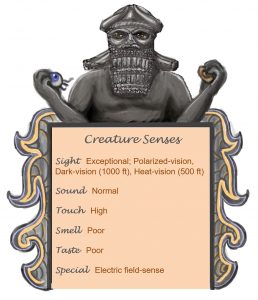 Each has an enormous mouth lined with teeth as sharp as scalpels, and odd double-hinged jaws designed to tear away huge chunks of flesh with almost surgical efficiency and swallow anything up to half of their size. Webbed hands and feet make them powerful and capable swimmers, though they remain dangerous on land. Slaazrou have tympanums for hearing, though these are not generally efficiently developed.

Manitak’s spawn are the product of demonic fracturing tempered by the regenerative vigor of the Positive, and sprout like a cancer from the ever-growing flesh of their forebear. Mutations within the brood are therefore extremely common, and any analysis of the species would mislead the reader who assumed that all of the traits described apply to each specimen rather than a very generic “average”. This “average” Slaazrou stands about six to seven feet tall and is broadly built, though many are taller or shorter. Some few may be found with extra limbs or even extra eyes. Most specimens are a sickly green-grey, and have strangely iridescent irises. 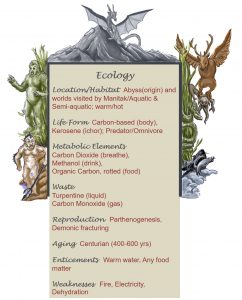 This capacity for mutation is a double-edged sword; though a brood taken as a whole is almost impossible to eradicate completely, and can adapt to nearly any environmental conditions imaginable, there is always a noticeable minority of the fiends that are so heavily deformed that they need to nearly drag themselves about. These are often eaten by their brood-mates, their jerky movements and apparent weakness signaling their availability as prey.

Unlike other fractured demon-spawn, Slaazrou can multiply of their own accord parthenogenically, sloughing off what appear to be chunks of tumorous tissue that develop quickly into autonomous predatory larvae. Like a horrific version of the growth from tadpole to frog, these cloned juveniles eat whatever they can catch until they are large enough to grow limbs and take their place amongst their kin. Larvae and adults alike produce a thick, cloying slime that make them difficult to hold, and render prey or potential predators inert with nausea- a particularly effective weapon in water, where it spreads around them like a foul cloud.

Like all of the other true demons, Slaazrou are ruinous on mortal worlds, being to an ecological system what a plague is to a city. On Abyssal worlds their voracity is somewhat counterbalanced by the ferocity of their potential prey, and on the many Abyssal planets that they have been found they are considered to be predators toward the bottom of the food chain. Those that survive amidst such abundance, though, may grow far larger than the majority of their brethren. Legends of frog gods may be attributable to very old and well-developed specimens. 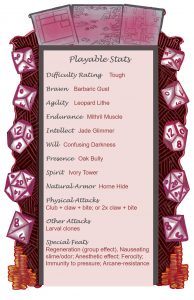 In addition to the widely varied defenses afforded different individuals by mutation- from elemental resistances to poisonous skin- the species is notable for its regenerative capacities, which allow individuals to recover from unbelievably extensive systemic damage, up to and including the excision of major organs. One recorded specimen is known to have recovered from the removal of all brain tissue except for the neurocord, rendered comatose for a full week before regaining what passes for Slaazrou cognitive function.

When a brood has destroyed all available organic life, remaining individuals enter torpor, shutting down most biological processes and ceasing to feed. The fiends almost invariably congregate in or around warm pools (of any level of salinity), pressing close to one another in a tangle of bodies and secreting their infamous slime to repel any predator species that may have escaped the teeth of the brood and seek recompense.

Once dormant, Slaazrou may stay immobile for centuries if left undisturbed, their demonic energies keeping them alive as they wait to feed. It is unknown just how long they can remain in this state; none has ever been found dead, but it is probable that if one were to die it would be consumed by its closest neighbors in the tangle. For all that they may last indefinitely, these demons are easy to rouse- their glassy eyes retain the capacity to discern movement and color no matter the level of their hibernation.